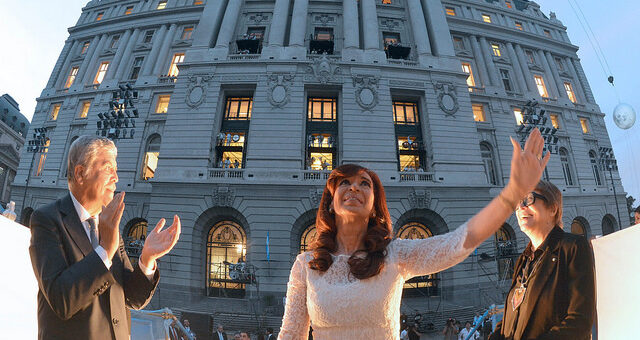 Six years ago, the Kirchner government, at loggerheads with the powerful Clarin media group, adopted legislation to hurt dominant players in the country’s media. But not much has changed since then. An analysis from Martin Becerra.

October 2015 was the sixth anniversary of the audiovisual law that replaced a broadcasting act in Argentina, which was inherited from the country’s last military dictatorship (1976-1983). Before 2009, that law had undergone amendments during a period of 20 years. For the past 12 years, the Argentinian presidency was shared by the Kirchners, Cristina Fernandez de Kirchner and her late husband, Nestor Kirchner. The Kirchner era is ending today as Argentines go to polls to elect a new president. They can’t vote Mrs Kirchner again as she is barred by law from seeking a third term.

The audiovisual law adopted in 2009 followed the rupture in relations between the Kirchners and Grupo Clarin, the main multimedia organisation of Argentina. It also followed the “farm crisis” of 2008, a dispute between farmers and government over high taxes on exports. But while Nestor Kirchner, who ruled between 2003 and 2007, did not clash with the big media groups, Mrs Kirchner was very active in introducing new regulations and policies in the media during her two mandates between 2007 and now. The Audiovisual Law was not the sole piece of media policy deployed by the Fernandez de Kirchner ́s administration.

The media policy steps taken by Mrs Kirchner had many effects. One is the Papel Prensa case. Papel Prensa is the largest newsprint factory in Argentina. It has been co-owned since the dictatorship years by the newspapers Clarin and La Nacion, with the government holding a 27.5 percent stake. Mrs Kirchner reopened during her last mandate the sale of Papel Prensa to the two newspapers back in 1977, saying that the deal was illegal. A bill aimed at taking back shares in the company to push the state’s stake to 51 percent was presented in the congress in 2013.

Another move was the creation of Football for All (Fútbol para Todos) Program, allowing citizens to view freely football matches on television. The adoption of a Japanese-Brazilian standard for digital terrestrial television was another major decision as all broadcasters in the country have to adopt this standard when migrating to digital television. Mrs Kirchner had a finger in many other developments in the media, including creation of thematic state television channels, support for non-profit groups to produce content, the key role given to the state as the primary ad spender, decriminalization of defamation in cases where public interest is involved, and economic and political support for the creation of private media groups related to the government.

The audiovisual law itself brings a major shift in the freedom of expression law in Argentina and, in several respects, in Latin America. For example, it reserves 33 percent of frequencies to non-profit group, it imposes limits on market concentration and prevents the transfer of broadcast licenses. Moreover, the law creates a regulatory authority (the Federal Authority of Audiovisual Communication Services, AFSCA) whose governing structures are composed not only of people from the ruling party, but also from opposition parties. It bars public services providers and telecoms to enter the audiovisual services sector. Some say it favors the Catholic Church.

But what has really been the impact of this law? How much of it has been implemented in these six years?

No Fooling With the Big Boys

Many lauded this law for the support it pledged for non-profit groups. But that was only dust in the eye. A very small number of licenses, under 180 in the whole country, were awarded during these years, which shows that this was not a priority for the government. Yet, a positive development was the launch of a fund for community and non-profit media accessible to non-profit organizations.

Large media groups: the law had no significant impact on the ownership concentration in the media as large groups did not comply with the legal requirements aimed at reducing this concentration. These mighty conglomerates include the Clarin group, Telefe-Telefonica, Supercanal-Vila-Manzano, Telecentro-Pierri, PRISA, Hadad-Cristobal Lopez-Indalo.

In contrast, many things happened in the state sector. Roughly 1,000 broadcast licenses were given to state organizations, including colleges, municipalities and universities. However, most of them have not yet launched operations. The law also helped the state broadcasting to diversify and expand. It launched six more channels. The state flagship channel, Channel 7 (whose slogan is Public TV) diversified production.

In short, six years after the audiovisual law was passed, the radio and television sector in Argentina is as concentrated as in 2009. No substantive changes in ownership were made although some of the big media groups made some changes to their internal corporate structures. Clarin remains the largest player in the Argentine media market. It shares its influence with Telefonica, a prominent TV broadcast company and one of the key providers of fixed and mobile telephones as well as internet. The existence of a handful of other, somewhat smaller groups does not challenge the dominant position of these two groups. Some exceptions are in the radio market.

In December 2014, the Congress passed the Digital Argentina law, which amends parts of the audiovisual law. Most importantly, it opens the broadcast sector to telephony operators, welcoming foreign corporations. The plans of the future media policy of the post-Kirchner-era government are unknown. But the confrontation between the government and Clarin is likely to calm.

To fully bring Argentinian law in line with the latest technology advances and revise some of the 2009 law’s objectives that have not been in six years requires an assessment of the entire Kirchner era.

That goes beyond the letter of the law.