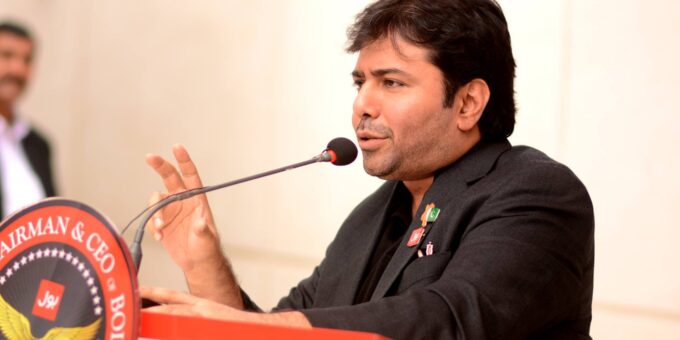 BOL TV boasted that it would be better than anyone and change Pakistani media. They shut down before starting broadcasting, but the operation is not likely to be scrapped. When security services needs it, BOL will rise again.

“Were [there] such salaries before?”, Shoaib Ahmed Shaikh, chairman and CEO of Axact group, the company that planned to launch a raft of television stations and newspapers in Pakistan, boasted in September last year in front of a gathering of journalists. “We will lead and others will follow in Pakistan,” he said.

A year later, Mr Shaikh is in prison and the media empire he wanted to create is in ruin. Swank studios in Karachi are empty and they’re likely to remain so. Three weeks after touting on its Facebook page that it was going to “change the face of Pakistani media”, on the very same page BOL announced its closure on 6 October 2015.

But what really sank BOL, a television operator that managed within a year to lure most of the top journalists in the country into its ranks? Many point to a scandal that engulfed Axact this year; but that scandal, it seems, was just a pretext to stop BOL. In fact, those behind the project, allegedly army and security services, do not currently need this project any more, according to four journalists, in Pakistan and the U.K., who have closely followed the case.

Scuttlebutt about BOL operations started to circulate in local circles four years or so ago. The group began in 2011 to aggressively hire journalists from all major media groups in Pakistan. They were lured with the promise of paychecks well above the industry average. Some of the most renowned journalists were offered mind-boggling benefits packages. Houses and cars, and sometimes even hired bodyguards, were added to already fat salaries – in some cases in excess of US$ 70,000 monthly.

Back then, journalists were saying that the BOL channel network was backed by Dawood Ibrahim, a 60-year old gangster who led the Indian organized crime syndicate D-Company. According to U.S. intelligence, he had close links with terrorist organizations such as Al-Qaeda. Sought to this day by Interpol, Mr Ibrahim’s location is unknown. Journalists in Pakistan say that he most likely hid in Karachi before heading to Dubai. Besides Ibrahim, BOL was also known to be backed by Pakistan’s spy agency, the Inter-Services Intelligence (ISI). The vehicle that was officially put in charge of BOL’s ownership was a software manufacturer, the Karachi-based Axact, which had worked for ISI before.

From its early days, BOL vowed to shake the Pakistani media market. They often said that their standards would be much higher than CNN or any other major international TV chain. BOL planned to launch a news and entertainment channel first to be then followed by a sports channel and newspapers both in English and Urdu, the national language in Pakistan.

BOL’s plans raised eyebrows among businesses as the media market in Pakistan has been grappling for years with economic difficulties.

But this year has proved fatal for BOL.

The deadly blow came in May 2015 from where BOL least expected it. The New York Times unveiled that Axact, besides some software making activities, was hiding a global diploma mill operation. The company was issuing fake diplomas from made-up universities and high-schools with garish websites maintained by Axact’s IT personnel.

By the end of the month, Mr Shaikh was arrested for investigation. The scandal shattered Axact’s plans to launch BOL TV last June. Moreover, the effect on its staff was devastating. Following the arrest of Axact’s head, several senior journalists resigned from BOL. They included BOL’s editor-in-chief, Kamran Khan, who had left his primetime talkshow at rival Geo News last year to join the new channel.

With Mr Shaikh behind bars, last August ARY group announced its agreement to take over BOL. ARY’s CEO and founder of ARY Network, Salman Iqbal, told employees that month that he would launch BOL TV within three weeks. But that didn’t happen and now the fate of BOL seems to be sealed for good as BOL announced its shutdown. The move was officially prompted by an order from the Pakistani broadcast regulator, PEMRA, which was required to do so by by the federal information ministry.

But this is not the end of the story. Hefty investments have been already made in studios and equipment. It is unlikely that those who backed BOL would let all this operation and, crucially, investment, go. BOL, in fact, seems to have fulfilled its purpose, at least on a short term. “The military gained so much clout last year that there is no need for a powerful new media group,” a journalist working with a daily newspaper in Pakistan told me. “All of the media in Pakistan at the moment are more or less in line.”

BOL was initially a response particularly to Geo group whose broadcast media was becoming increasingly critical of the ISI’s work. Closing down a media outlet or attacking their journalists would unleash even more criticism, so ISI decided to pump money into a new venture and steal journalists from other outlets. By doing so, BOL has badly shaken the Pakistani media market, which was already battling deep financial problems.

In the past, ISI was known for bribing journalists or overtly paying money to television channels to secure the coverage they wanted.

“They [BOL] did the job for now,” a Pakistani journalist in the U.K said.

The glitzy BOL studios will be locked up and closed down, but it’s unlikely that they will be scrapped. The same people who wanted to launch BOL are close to the ARY group. When needs arise, they will be back in the studios. As one journalist put it, BOL is a weapon. Now, it’s an uncocked gun. When needed, it will only need loading – and probably some strong bullets.