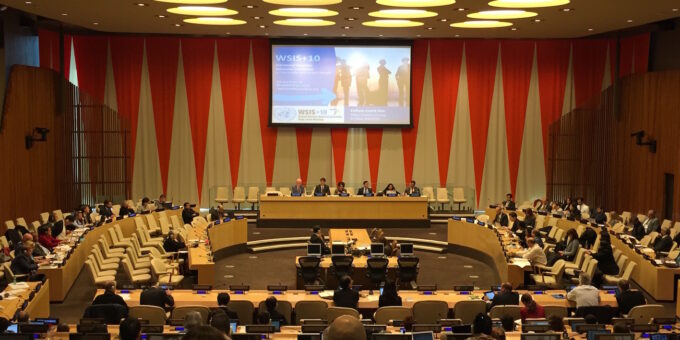 A decade ago, the UN set up a slew of goals for better usage of information and communication technologies. Now, they have started to assess what has been achieved. One thing is abundantly clear: we are still grappling with problems from the past. Here is a dispatch from inside the talks.

A decade ago, the United Nations (UN) organized the World Summit on the Information Society (WSIS), a series of meetings to discuss the global role of  Information and Communication Technology (ICT). Their hopes were high for the beginning of true collaborations for development and democracy. WSIS created principles and  set up action plans and goals, ranging from access to technologies to online ethics. Now, ten years later, the UN wants to review what has been accomplished. This week, non-governmental organizations (NGO)s had their second round of the WSIS (known now as WSIS+10) informal consultations in New York to agree on the biggest challenges in the ICT field and call for global action.

Cellphones may not only look very different than in 2005, but the average mobile device of today can also provide easy, inexpensive internet access, as well as offer journalistic, educational, health, and banking services, both in rich and less developed countries. Social media have opened up powerful avenues for social and political mobilization. However, the NGO consultations on 19 October 2015 pointed out inequities that trace right back into mass media era. We still struggle with the old school difficulties in providing access, governing the media and communication platforms, and ensuring human rights.

Inclusion for All? Not Really

In terms of access, the question is not only about the so-called digital divide, that is, in academic and technology lingo, lack of access to the internet and media technologies. The power to access ICTs also has a socio-cultural dimension that some call digital exclusion. This means that women and other marginalized groups are disregarded, or even abused, as technology users. This is clearly not only a problem in non-Western countries. Just think of, for instance, #Gamergate and other trolling activities against women in ICTs. The Gamergate controversy erupted in August 2014 as it turned out that an anonymous and amorphous group was running a campaign of harassment of feminists online. The campaign included threats of rape and death threats.

Another challenge is: who governs the internet? WSIS was the first truly international gathering where nation-states, UN organizations, as well as NGOs, the private sector and the media came together on this issue. It gave birth in 2006 to the Internet Governance Forum (IGF) that has sought to operate in the same “multi-stakeholder”, spirit. The IGF was supposed to be a forum for policy debate on the internet where NGOs, private companies and governments would discuss from an equal footing. Yet, many NGOs feel that they are not given equal chances to the private sector to have their say in the IGF process, let alone the nation-states.Funding to participate in these meetings is, for these organizations, an obstacle. Another problem is the lack of accurate, comparable, trustworthy indicators and data on information technologies from governments. This hinders the transparency of global governance. And the list of problems goes on.

The most urgent calls for action in the WSIS+10 consultations, however, come from non-profits working on communications and human rights. Freedom of expression is threatened every day, everywhere. In some countries bloggers get jailed for their opinions; in others, academics get fired because of their Tweets. Last January, blogger Raif Badawi in Saudi Arabia received the first 50 of the 1,000 lashes as punishment for running a blog on freedom of speech. Associate professor Steven Salaita of the American Indian Studies program at the University of Illinois at Urbana-Champaign was fired over critical views on Israel posted on Twitter.

Mass surveillance is a reality. And our rights may be threatened in new ways because of ICTs. That is why many NGOs call for broadening of what we consider human rights. For instance, it is not enough that we have an opportunity and a platform to speak our mind. Do we have the competence, the digital literacy, to do so?

The lessons from WSIS and its aftermath are sobering. The same tools that can support political organization for the Arab Spring can also disseminate the propaganda for ISIS, equally effectively. And the very same disparities that exist offline, and were pertinent in the mass media era, replicate themselves in the field of ICTs.

But it is good to recognize that WSIS instituted the principle of inviting different stakeholders to discuss ICTs at a global level. As imperfect as those processes may be, they are now common practice. That alone could be called a shift in power. The more the civil society insists on that practice, and demands it to be improved, the more influence we all will have in these conversations.

This week’s consultations also highlighted the role of the organized civil society as watchdogs, of nations and of the UN, and their ability to steer conversations. For example, a group of organizations and individuals recently pointed out major flaws in a badly researched but potentially impactful UN report on cyber violence against women. The criticism went viral, and the report was pulled, with apologies.

And, if nothing else, the WSIS+10 discussions remind us that digital exclusion, internet governance, and human rights are truly global issues that potentially impact us all. When the UN General Assembly meets in December 2015 to discuss the next steps of WSIS+10, let’s hope for a cautiously optimistic road forward.