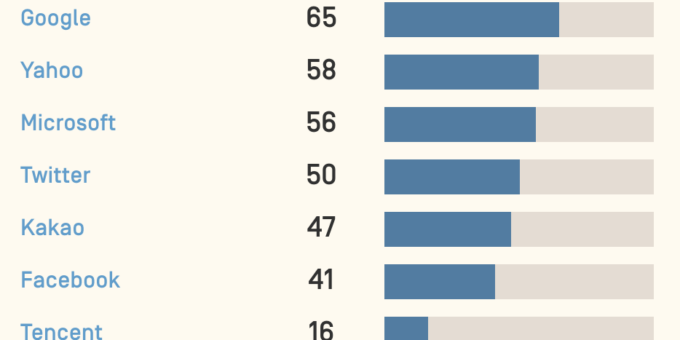 Internet and telecommunications companies influence our world significantly, be it our personal interactions or political engagement. A new index has been developed to see how they fare in their general commitment to digital rights, as well as in terms of their practices regarding freedom of expression and privacy.

The Ranking Digital Rights, a project supported an impressive list of funders, research institutes and experts, launched the inaugural Corporate Accountability Index early November. In this first phase, the project has assessed 16 internet and telecommunications companies according to 31 specific indicators.

“The top-scoring company is only 65 percent. So if this were a test, they’d be getting a D in school,” said Rebecca MacKinnon, the project director at the launch of the Index in New York on 3 November 2015.

The Good, The Bad and The Dreadful

Reviewing the ranking results, good news is hard to find. The highest scoring companies, the internet giants Google, Yahoo, Microsoft, Twitter, and the telecoms Vodafone and AT&T simply get a pass in securing users digital rights. But it is no surprise that corporate commitment to human rights pays off in practice. The companies that create policies to ensure digital rights, that collaborate with other stakeholders, and that assess their own actions and provide remedy, also fare well in securing users’ privacy and respecting their free expression.

The same could be said for the losers of the ranking: faring badly in one category means faring badly in most of them. The companies that practically failed according to most of the indicators include the pan-Asian telecom Axiata Group Berhad, which in this index represented by its Malaysian company Celcom. Celcom indicated no corporate commitment to digital rights whatsoever.

Still, when it comes to freedom of expression, it received a better score than several other assessed companies, amongst them AirTel India (of Bharti Airtel Limited, a company serving some 324 million customers around the world). AirTel had the lowest score on freedom of expression in the entire Index. This is a result of several factors. For instance, terms of service for Airtel India’s mobile and fixed broadband services were hard to come by and were provided only in English. The company also keeps silent about how it enforces prohibitions to content.

On privacy, as well as on the overall score, it was the Russian Mail.ru Ltd., with its VKontakte social network, Mail.ru email platform, and Mail.ru Agent messaging platform, that received fewer points than any other company in the entire Index. Given the national context of Mail.ru, this result is not surprising. For instance, Russian law requires all user data to be shared with authorities. As the project researchers note, ‘the line between government and private requests is generally blurry, creating strong disincentives for companies to disclose any type of requests for user data’.

Some unexpected results come from Europe. While data protection laws in the EU are stronger than those in the U.S. the two European companies assessed, Vodafone and Orange, disclose significantly less information about the data shared with the authorities than their American counterparts. In addition, the South Korean mobile platform company Kakao ranks relatively well, right after the big companies, and demonstrates that a serious regard to digital human rights is not only a Western quest by the giants. It can be effectively implemented elsewhere as well, by smaller, national telecoms. But, sadly, the most surprising observation is that not a single company of the total 16 shares any data or statistics on the volume or nature of content they remove, or on accounts being shut down in enforcement of terms of service.

The good news is that there is commitment. And, as it seems, commitment will eventually yield results. The Corporate Accountability Index provides a global check-list for industry players and helps other stakeholders to hold the companies responsible for their impact on digital rights.