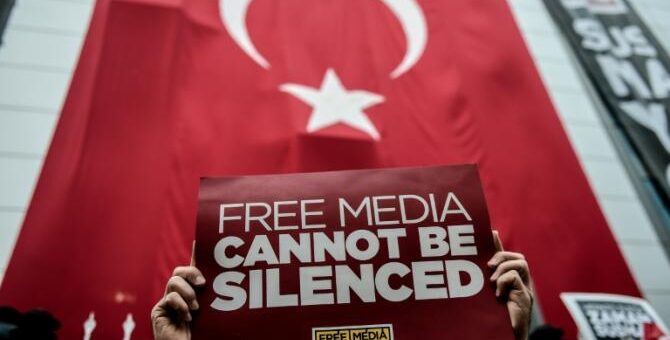 After the snap elections on 1 November 2015 when the ruling Justice and Development Party (AKP) won a landslide victory in Turkey capturing 317 seats in the 550-member Turkish legislature, an increase of 59 deputies which results in AKP holding the absolute majority, the concerns over media freedom in Turkey have increased. A lot had changed in five months since the last election in June.

We witnessed bombings in Ankara that killed 109 people and injured more than 400. The refugee crisis became a major issue as Turkey currently hosts more than 2.5 million Syrians fleeing the four-and-a-half year conflict in their country.This chaos actually helped AKP increase its public support. Even the European Commission (EC) decided to withhold the Turkey Progress Report until after 1 November 2015 election; it is a document which contains serious criticisms on the Turkish government’s violations of human rights, freedom of the press and other moves that contradict Copenhagen criteria, the fundamental principles for joining the EU, like rule of law and protection and respect for minorities.

One of the major issues highlighted in the report was criticism of the police raids on an opposition TV channel, Bugun TV and a newspaper, Bugun Daily, three days before the elections. Those media outlets belong to the followers of Fethullah Gulen, a self-exiled Pennsylvania-based preacher, once a close ally of AKP but now its chief enemy.

AKP and Mr. Gulen had once formed a tactical alliance against military tutelage and the secular elite, which had victimized both their predecessors. However, after years of a “conservative coalition” the Gulen community became a thorn in the President’s side for many reasons.

After the November election, the pressure on the Gulenist media has intensified. Samanyolu TV and 13 other television channels and radio stations close to the Gulen movement were removed from the state-owned Turkish Satellite Communications Company (Turksat) platform on 15 November. A month ago, seven TV channels, including a children’s station, which belong to companies close to the Fethullah Gulen movement, have been removed from one of country’s leading pay satellite networks and digital platforms, Digiturk.

Additionally, the channels in question have also been removed from the online streaming services Turkcell TV and Tivibu at the order of the Ankara Public Prosecutor’s Office based “on the suspicion that the channels support a terrorist organization.” Bulent Kenes, the chief editor of the Gulenist English language newspaper Today’s Zaman was arrested for insulting the President Recep Tayyip Erdogan and released on probation on 8 October. However, he was detained again the following day after the prosecutor in this case objected to the court’s release ruling.

In other words, the AKP government is poised to destroy the Gulenist media outlets.

One of the major tensions related to media between June and November elections was related to the attacks on the Hurriyet media group building and the assault on Hurriyet daily’s columnist and TV host of a debate program on CNNTurk, Ahmet Hakan. The assault on Mr. Hakan occurred three weeks after mobs attacked the Hurriyet building with stones and sticks. Mr. Hakan was attacked by four men, three of whom were reported to be Justice and Development Party (AK Party) members, in front of his house in the early hours of 1 October after he had received threats for expressing ideas critical of the AK Party government in his columns. His nose and ribs were broken. Three of the four attackers have since been released.

There are also many blocked websites – the actual number remains unknown. The independent initiative Engelli Web (Engelliweb.com) crowdsources information on blocked websites. It listed 105,958 of them in November 2015. While the majority of banned websites concerned pornography, they also involved dissident and pro-Kurdish websites. During the period between the two elections many more dissident news websites (including Nokta news magazine) were blocked.

The elections may be over now, but the Turkish media still faces major problems and they are more acute than ever. For instance, every major newspaper or television channel is owned by a large conglomerate operating in various sectors such as construction, energy, mining, banking, and telecommunications. These conglomerates compete in public tenders and get contracts from the government. Thus, they often use their media to promote government interests by disseminating propaganda and manipulating facts. Besides, arbitrary tax penalties are imposed to force newspapers into bankruptcy. After that happens, their ownership changes to people close to the President’s circles. In other words, clientelism remains a huge problem in the country.