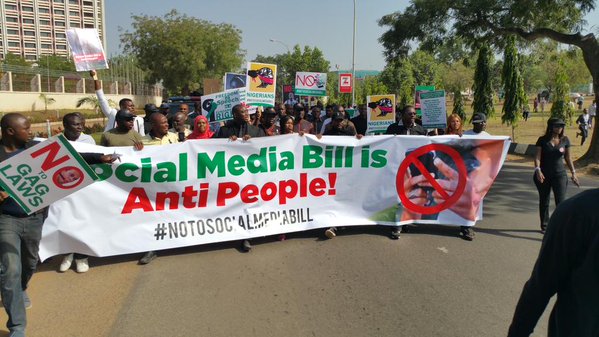 Since its inauguration June 2015, the Senate, the upper legislative chamber of Nigeria’s National Assembly, has been wading through a series of controversies ranging from bogus salaries and allowances, corruption allegations, underperformance, to most recently an anti-people legislative proposal initiated by senator Bala Ibn Na’Allah who has a rather evasive background.

Organizations and individuals including the Nigeria Union of Journalists, civil society groups and civil rights activists, and other well meaning Nigerians, continued to condemn plans of the Nigerian lawmakers to adopt a law that is likely to bludgeon freedom of speech in the country. The proposed bill is laughably named“Act to Prohibit Frivolous Petitions and Other Matters Connected Therewith”. The protest reached its climax on 8 December 2015 when human rights and social media activists marched to the National Assembly in Abuja in a rally tagged #NoToSocialMediaBill.

The march followed media reports that this bill has passed the second reading in the Senate and was subsequently passed to the relevant committee for consideration. The committee has to report back to the Senate within three weeks. Participants in the march called on the National Assembly and in particular the Senate to immediately veto the bill, which was sponsored by senator Bala Ibn Na’Allah from Kebbi State.

They said: “The issues of concern are therefore the suspicious secrecy and shrouded nature of this Bill.” Activists argue that the proposed bill is in conflict with the Nigerian Constitution adopted in 1999 and amended 11 years later that guarantees Nigerians “shall be entitled to freedom of expression, including freedom to hold opinions and to receive and impart ideas and information without interference.”

But what is all the fuss about?

The proposed law is seen by activists as an attempt to cudgel critics of lawmakers and politicians. For example, “anyone who intentionally propagates false information that could threaten the security of the country or that is capable of inciting the general public against the government through electronic messages” would face up to seven years in prison or fines up to US$25,000, according to the planned bill. Disseminating “abusive statements” (whatever that means) via text messages, Twitters, WhatsApp or any other form of social media can lead to up to two years in prison or a fine of US$10,000. The same applies for messages found “to set the public against any person and group of persons, an institution of government or such other bodies established by law.”

“We consider this bill as abominable and capable of causing irreparable damage to the nation’s quest for credible democracy,” the Nigerian Union of Journalists said in a statement. The union’s representatives believe that the failure of the state to provide unhindered access to information can lead to “monumental corruption and abuse of citizens rights.” The union warned lawmakers and government not to play “dirty politics” when it comes major national issues.

A coalition of press freedom groups, Partnership for Media and Democracy (PAMED) is concerned that that the bill violates all the norms of democratic practice, freedom of expression, press freedom, transparency and accountability as well as open governance. PAMED, comprising the Nigerian NGOs Institute of Media and Society (IMS), International Press Centre (IPC) and Media Rights Agenda (MRA) further holds that the bill completely negates the letter and spirit of major international conventions to which Nigeria is a signatory such as the International Covenant on Civil and Political Rights, the Universal Declaration of Human Rights and the African Charter on Human Rights.

Another civil society group, Media Ethics Organization noted that “a bill, which sets out to punish the author and publisher of a petition without a duly sworn affidavit will render the public further hopeless instead of widening the space for the aggrieved to ventilate their grievances without violence.”

Dr. Kunle Hamilton, a journalist and commentator on social issues, slammed the bill, calling the planned of the lawmakers “preposterous”. He believes that particularly social media in Nigeria has become the poor man’s only hope of airing his  views against corruption in high places. He sees this law as an attempt to smother those voices. Mr Hamilton argued that everywhere else in the civilized world, libel laws and regular criminal codes are “enough to protect honest public servants against character assassination.” You don’t need another law for that.

But all these waves of condemnation have so far fallen on deaf ears. The Senate’s leadership has insisted on passing the law. Authorities insist that social media can be abused and have become a petri dish for hate speech. Although agreeing that social media has been a prime ingredient for the growth of democracy in Nigeria, the Senate’s President, Bukola Saraki said that lawmakers could no longer ignore the fact that this channel of communication is abused by some. Information minister Lai Mohammed has recently been described as invoking the spiraling level of hatred among Nigerians, especially the educated ones, which have spawned on social media. He argues that the kind of debate that is taking place on social media “is exploiting the fault lines in our national unity.”

Still, these are not sound arguments to send people behind bars for seven years.