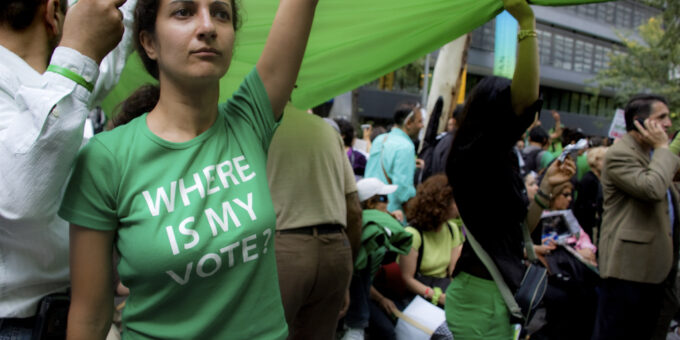 Back in 2013, Iran didn’t meddle with the internet before the presidential elections because they knew people liked the then would-be president Rouhani. But now, two weeks before parliamentary elections, the country’s government wants to hire a company to fence critical voices out. This is a bitter reminiscence of the 2009 government clampdown on dissenting voices, on- and offline.

While almost 50% of the top 500 visited websites worldwide, including Facebook and YouTube, are already blocked in Iran, the country’s Ministry of Communications and Information Technology has recently launched a tender to select a company that would do smart filtering of social media.

Internet censorship and social media filtering are not new in Iran. But these fresh efforts to toughen filtering just a couple of weeks before two great and challenging elections cannot be accidental or meaningless. On 26 February 2016, Iran will hold parliamentary elections to elect both the Islamic Consultative Assembly and the Council of Experts, the first time these two bodies are elected on the same day. The former is Iran’s parliament and the later is a council of Islamic theologians whose mission is to appoint the country’s supreme leader.

Fearing Your Own People

Internet filtering began to increase seriously in Iran when the conservative president Mahmoud Ahmadinejad was elected in 2005. As a result, a large number of different websites with various types of content were blocked. Authorities claimed that filtering was a moral and normative initiative against the distribution of pornography among youth. However, the actual target of this process were news websites and online content posted by opposition activists.

Social media had been a specific target of filtering in Iran from the early days, and they still are now. The question is why Iran’s regime is so badly scared by social media. The answer can be found in the 2009 post-election protests. Following the disputed victory of Mr Ahmadinejad in the 2009 elections, people took to the streets in Iran’s major cities. Police and paramilitaries attacked the protesters. Need Agha-Soltan’s video capturing her last moments after she was shot was seen by millions of people all over the world on YouTube.

The most popular social media outlets in Iran, Facebook and Twitter, were blocked during these protests as the Ahmadinejad government and Iran’s regime believed that social media was the most powerful means of communication for the protesters. They distributed photos and videos of the protests to the entire world through these online platforms.

With the February 2016 elections, fears that social media would become a powerful tool in the hands of opponents have once again been revived.
Since 2009, Iran held in 2013 another presidential election that was won by Hassan Rouhani, still in power today. However, the 2013 elections were not seriously challenging in comparison with the forthcoming ones. Firstly, in 2013, both protesters and the government were somewhat still recovering from the events of 2009 and thus scared of another wave of unrest.

Secondly, the regime knew that the victory of Mr Rouhani would be satisfying for former protesters. Thus, nothing similar to 2009 was expected to happen.

But now, the council of experts has already rejected many reformist candidates in the forthcoming elections, which has drawn sharp criticism from Iranian civil society. Social media can thus once again become a galvanizer of protests.

Time to Show Some Rectitude

Among various online platforms and on social media, Telegram has been specifically targeted by the new wave of internet filtering.

Secondly, Telegram is targeted because it has become massively popular among Iranian internet users and has emerged as an effective platform for communication among regime opponents in any future protests.
Ending internet filtering and support for freedom of internet, press and speech were some of the promises Mr Rouhani made during his campaigning for the 2013 presidential election. These promises secured him a hefty number of votes.

It is now time to see whether Mr Rouhani will keep his word and stop the newly launched efforts of internet filtering or if he will just stay away and watch internet freedom being throttled.

Photo: Dina RegineThis photo can also be seen in the Metropolitan Museum’s slideshow ‘You Got Eyes’ that ran in conjunction with Robert Frank’s exhibition at the Met.