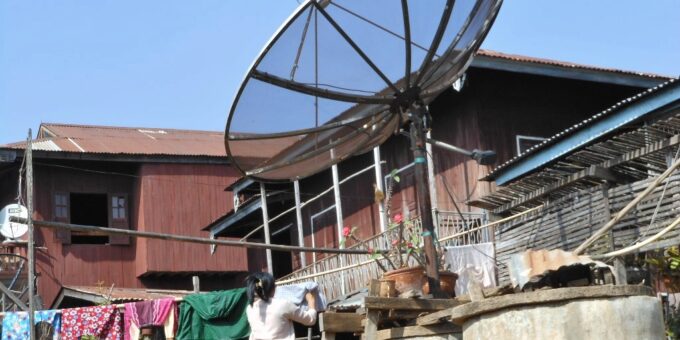 Many media observers were discombobulated when a state official hinted that Myanmar’s state-run TV could be shut down. But that’s just part of an outlandish government gambit to confuse people and, if possible, garner more support.

Media experts and journalists were left dumbfounded when last Sunday an official of the information ministry in Myanmar insinuated at a powwow of ethnic media groups in Arakan state that the country’s state broadcaster Myanmar TV (MRTV) would or could be dismantled. If MRTV is dissolved, then ethnic media will suffer, said U Tint Swe, a permanent secretary at the ministry.

The state has been pumping hefty cash in the past few years into strengthening its mouthpiece, as MRTV is known. Why would the government want to shut it down now?

They don’t. All they say about closure is complete hokum, according to several journalists based in Yangon, the country’s capital city.

This is not the first time state officials have come out with such insinuations. In recent months, journalists increasingly hear scuttlebutt that the MRTV is likely to fold. But it turns out that this story is propagated from within the state apparatus. The reason? On one hand, to confuse people and other media outlets. But on the other hand, it’s also a way to garner support for MRTV. “You won’t believe it, but they think that if you spread rumors that MRTV is to shut down, some people out there might think they will not see any television anymore,” a Yangon-based journalist said.

The future of the Myanmar state broadcasting is a hot potato in Myanmar these days as the government is discussing the country’s new media strategy following last year’s elections when the country’s military conceded elections to the democracy movement headed by the Nobel Peace laureate Daw Aung San Suu Kyi.

In August last year, Myanmar adopted a new broadcast law that allows private television stations to operate in the country and puts forward legal provisions for the transformation of MRTV into a public broadcaster. The implementation of this law has been delayed by the transition to the new political power. The National League for Democracy (NLD), winner of last year’s elections, is to officially take the helm of the country in mid-March 2016.

European organizations with knowledge about how public service media work in reality have facilitated debates about the future of public media in Myanmar. In early February, Deutsche Welle (DW), Germany’s international public broadcaster brought together in Yangon journalists, media experts and policy makers to discuss how MRTV should be transformed.

Even high-ranking officials at the ministry of information who lived most of their lives supporting military dictatorship started to speak the language of reform. “[…] public service broadcasting is a noble task,” Mr Swe, formerly head of Myanmar’s censorship office, was saying back in 2013, only one year after censorship was junked in the country.

But the MRTV reform is not going to be a cakewalk. The state-to-public transformation experiment failed in almost all countries that scrapped communism in eastern Europe back in the 1990s. In western Europe, the petri dish of public service media development, broadcasters are coming under fierce attacks from private broadcasters.

In Myanmar as well, media observers also slammed the support that the state gives to print media. They say that state-run newspapers, Myanma Ahlin, The Mirror and The Global New Light of Myanmar, with the highest circulations in Burma, massively distort the market as they operate mainly with state subsidies.

Many at state-run media institutions, particularly those in high positions, fear the change. The information ministry has a staff of 7,000. Of those, 3,000 are on the payroll of state-run media enterprises.

But of more importance in the state media reform saga is the future of ethnic state coverage.

Mr Swe’s recent comments on how the closure of MRTV would impact ethnic media irked many journalists, particularly those in ethnic media outlets. Burma News International (BNI), an ethnic media coalition, said that they have never received funds from the government in spite of the government offering such support in the past. Thus, BNI’s representatives argued, there is no connection whatsoever between MRTV and ethnic media. If MRTV dies tomorrow, no ethnic media would suffer, they said.

However, MRTV is seriously concerned about its presence in ethnic states. Thus, Yangon-based journalists say that Mr Swe, in fact, referred to a slew of local broadcasters, known as national race channels, that the information ministry has launched and financially supported in ethnic states since 2013.

Myanmar has 135 ethnic groups and more than 100 languages. In local areas, people don’t have access to mainstream media. The government media have struggled for more than two years to improve their position there. But the August 2015 broadcast law will allow local broadcasters to apply for frequencies and set up community radios.

That is a fresh threat for the state-run media in Myanmar.

They will do whatever it takes to defend their position. But with the country’s media market opening, they are likely to lose much of their prominence. Sooner or later.