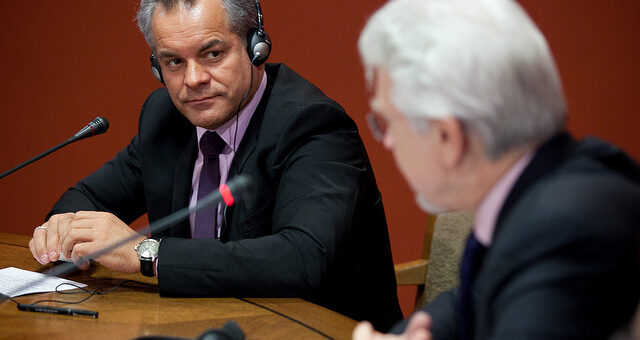 Politicians meddling with the journalism business is not uncommon in Moldova’s media. But now, the battle to control dissenting voices moves online. The recipe used by politicians: buy existing and launch new digital media, infest the cyberspace with bogus sites and recompense the bloggers.

In the past couple of years, concentration of ownership in the Moldovan media has dramatically accelerated, which has had a harmful effect on independent journalism. The most popular, mainstream media outlets in the country have been engulfed by the conglomerate General Media Group, which belongs to Vlad Plahotniuc, a highly controversial politician and businessman, vice-president of the Democratic Party of Moldova (PDM), according to ownership data from media experts. In the past, Mr Plahotniuc was accused of undue influence on Moldovan politicians. In neighboring Romania, he was investigated for using a fake identity on the Romanian territory. In 2012, Mr Plahotniuc was reportedly wanted by Interpol as he was suspected of “association with criminal groups, organized crime and money laundering.”

Other political parties and politicians are also linked with media outlets. For example, TV7 and Bravo TV are owned by Chiril Lucinschi, MP and member of Liberal Democratic Party of Moldova (PLDM). Accent TV and NTV Moldova are owned by the MPs or people that have close ties with the Party of Socialists of the Republic of Moldova (PSRM).

Politicization of media in Moldova has been a worrying reality for years. In 2010, experts spoke about the growing Berlusconisation of the media in the country, a term (borrowed from the years of the rule by premier Silvio Berlusconi in Italy) used to describe the collusion between political power and mighty owners. Back five years ago, the self-proclaimed pro-European parties succeeded the Communists Party in power and created what they called back then the Alliance for European Integration. Controlling media was also on their agenda.

As ever, independent media outlets in the Republic of Moldova today can be counted on the fingers of one hand. Online media is already in the same situation. Many online news outlets have ownership connections with political parties and politicians or are controlled by them via third parties, according to data from the local news portal Ziarul de Garda, an independent outlet.

One of the most popular online portals, Unimedia.info is owned by the company Miraz, founded by the journalist Cristian Jardan. Unimedia.info was purchased by Mr Jardan in December 2014 from the company Interactive Media. However, the real purchaser and owner of this news portal is reportedly the ex-Prime Minister, Vlad Filat, who is the leader of the PLDM.

The Democratic Party controls through various intermediaries several online information platforms that have been launched recently. Politics.md and Democracy.md are owned by Intellect Group, a company whose founder and leader is Ian Lisnevschi, also the head of Garlem, a local association. During the latest street protests in late January 2016 against the government in the Moldovan capital city of Chisinau, it turned out that Garlem coordinated a spate of meetings aimed at supporting a candidate for the Prime Minister seat proposed by the Democratic Party.

Other online platforms such as Tsn.md, Aif.md, Actualitati.md and Replika.md have personal connections or are held by members or supporters of the socialists from the PSRM. Another dynamic online portal, Sputnik.md is owned by Rossiya Segodnya, a company registered by Vladimir Novosadiuc who is reportedly close to the businessman Ilan Shor, now mayor of Orhei city. Mr Shor’s name was mentioned repeatedly in the Kroll Report, a controversial audit report investigating into the disappearance of some US$ 1bn from three Moldovan banks in late 2014. The report was commissioned last year by Moldova’s central bank.

One recent trend in Moldova’s online media landscape is the appearance of numerous bogus “newsmaker websites”. They usually do not offer any sort of contacts or information about their owners. Most often some of them, such as Argumentul.info, Stirimd.net and Puterea.info serve as a “vetting” page for posts (news bits, articles, reviews and analyses) before being reposted and quoted by other media outlets. But those who understand the landscape of Moldovan politics inside-out can easily detect the political party or politician who is behind the respective portal.

At the same time, the Moldovan blogosphere has become more or less a bastion of courtier journalism in the service of political parties or politicians. Bloggers who write on political issues in Moldova are unofficially on the payroll of political parties. Their mission is to polish and promote the image of the party as well as to openly criticize political adversaries. A slew of unofficial lists of such bloggers with their political affiliation and even figures of how much they are paid have been floated in the Moldovan cyberspace.

But can anything be done to stave off the political cannonade on online journalism?

Campaigns on informing internet users about how online news media works would be one thing. Promoting transparency of ownership behind online media outlets would be another. “Keep the internet clean and free,” says Ioana Avadani, a media expert from Romania.

Some have been putting these ideas in practice. During the last two years, the Independent Journalism Center (IJC) in Moldova, a local media NGO, carried out a bevy of campaigns aimed at improving media literacy especially among the youth. Maybe now it’s time to shift the focus onto digital media literacy.

Once Francis Bacon said: “Knowledge is power.” So far, in Moldova, politicos seem to be Bacon’s most avid readers.