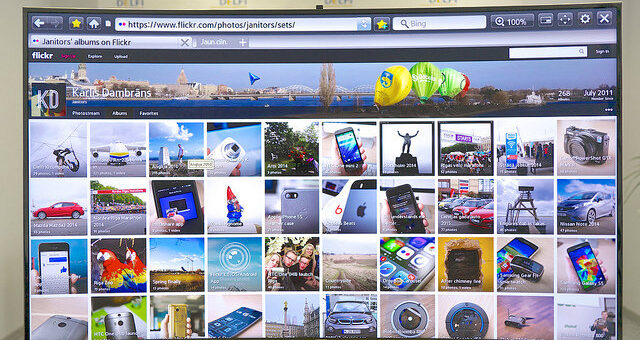 In George Orwell’s 1984, telescreens could capture any sound “above the level of a very low whisper.” Today, that gadget exists. For independent journalism, smart TV is not necessarily bad news: provided it’s not found its way into the wrong hands.

Imagine this: you and your wife sitting comfortably in your living room watching the primetime newscast, followed maybe by an evening series and then a late night political talkshow to learn more about who’s fighting in the upcoming mayoral elections. You might loudly curse a politician you see on one of these programs, go to the loo during a commercial break and frown when you learn from the TV that the government is imposing yet another tax on your income.

These days, if you have a smart TV, which is increasingly common in many countries, you will not be alone in your room. Not only all the words coming out of your mouth, but also your angry face and the short trip to the john are likely to morph into data parcels that are shipped instantly to companies listening and watching at the other end of the pipe, which at the moment are mostly marketers and ad shops. Smart TVs, in some technologists’ view, are the final frontier for real-time interactivity. But how are they going to change journalism, news consumption and delivery?

The impact there is going to be massive and come in totally unanticipated forms.

TVs With Eyes and Years

Smart TVs have the capacity to bring to your TV content from outside sources regardless of the distance. Connected to the internet, they provide a platform for apps and become the room-equivalent of the smart phone.
The number of shipped smart TV units worldwide is expected to jump to nearly 250 million in 2017 from fewer than 60 million in 2011, according to forecasts from Frost & Sullivan. Within one or two years at the most, the majority of Europe’s households are expected to have one smart TV.

Between 2011 and 2017, the price of smart TVs almost halved to an average of some US$ 1,000. In their belief that smart TV is going to be the fastest spreading gadget in China, the country’s rival internet giants Alibaba and Tencent joined forces last August to invest in the start-up Whaley Technology, which was created by the private-equity fund CMC to make smart TVs.

In 2014, Sony had an almost 25% share of the global smart TV market with over 124 million sets. It was followed at a distance by Samsung with a share of 12.5%, according to data from Gartner, a technology research group.
But besides all the options that connectivity offers, including browsing the internet or shopping online, the smart TV technology also gives viewers the possibility to engage with their TV set, thanks to their voice and facial recognition as well as motion control sensors. If the TV set owner enables the camera and the microphone, their TV practically gains a pair of eyes and ears.

The emergence of this new guest at your TV dinner brings numerous benefits for the viewer, but also serious dangers. Providers can better serve their clients thanks to the data they collect, according to experts from the European Audiovisual Observatory, a Strasbourg-headquartered provider of statistics and analysis. At the same time, there are “concerns about manipulation, cherry-picking, reduction of consumer choice, and information isolation,” the observatory stated in a recently released report.
Samsung made headlines last year when it warned that the spoken words captured by its TV set, including “personal or other sensitive information” will be transmitted to a third party.

When it comes to how people get informed about major issues, these concerns are even more unsettling.

Last fall, Newsy, a news service catering to digitally savvy youths, struck a deal with Xumo, a distributor of content on smart TVs, to launch a channel on its platform. Newsy is owned by The E.W. Scripps Company, a conglomerate with a sheaf of operations in print media and broadcasting across the U.S.

News apps were the third most frequent type of apps installed on smart TV sets in 2013, according to data from the Oxford-based Reuters Institute for the Study of Journalism.

With interactivity and engagement brought to a new level, smart TVs rejig the whole relationship people are having with factual content. Imagine you have on your TV set instant access to one of the fact-checking services springing up everywhere these days to verify what is being presented as fact in political speeches, on TV programs or newspaper articles. Or imagine installing a data service on your TV platform and embedding it into one of your favorite TV programs to understand the, sometimes missing, context to events presented on newscasts. Or further, imagine being able to build your own evening newscast through your preferred news aggregation service sitting in your TV’s memory.

And all of this by literally telling your TV what you want while a show is running or by only “programming” the TV set to activate any of these services (and others) when it detects a specific grimace or smirk on your face or when it hears you arguing with your wife over an issue covered on TV.

But if some of these information services are provided by parties not governed by journalistic principles, smart TV is likely to turn into a powerful propaganda-churning platform.

That’s why regulation of the smart TV landscape is probably one of the biggest challenges in this smart TV expansion. The European Audiovisual Observatory called in its latest report for a “more integrated point of view” on the smart TV regulation that would include media, privacy and consumer bodies and authorities.

Easy and fair access to apps and services on smart TVs for both consumers and service providers, clear usage terms and conditions and an easy opt-out function allowing viewers to shut down the TV’s eyes and ears when they want privacy: rules on these basic issues at least should be the base of any regulatory model.

Without such norms, the swanky smart TV could become yet another powerful weapon in some mighty and influential players’ hands.