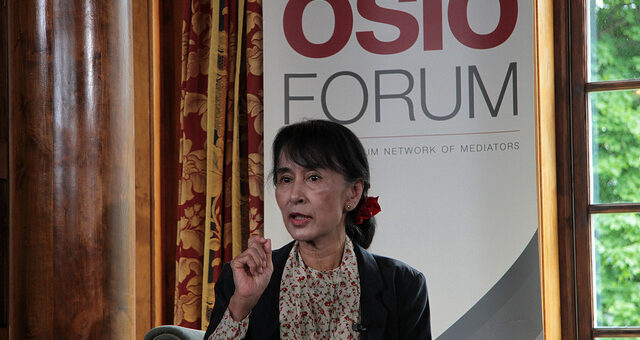 Local journalists are investing much hope in the newly installed power in Myanmar to reform the country’s media system. But that will be a gargantuan task. Manny Maung argues that it will happen, but slowly.

Myanmar has for the first time in five decades sworn in an elected president without military ties. The  road towards democracy has been somewhat flawed, but this marks a significant turn of events from authoritative military rule which the country endured for more than 50 years.

Myanmar’s newest president, Htin Kyaw, was until recently a diminutive public figure. The 69 year- old former school friend of Aung San Suu Kyi is seen as a “proxy” president, who she says will act in her place. Aung San Suu Kyi herself cannot step into the top job as a clause in the constitution bans politicians with foreign family members from the presidency – her two sons are British.

For now, she has instated Htin Kyaw in the role but has vowed to “rule above the president,” proposing a new position for herself as “state adviser in chief” – a  post that would see her at least as equal to the role of president and give legal validity to the decisions she makes on his behalf.

It is a hopeful time in Myanmar’s history, for so long both fledgling and sad. Finally, it seems the grip of military control is slowly being relinquished. But it is unlikely that tangible changes in freedom of expression or freedom of the press will be seen anytime soon.

The lead-up to the announcement by the National League for Democracy (NLD) of its presidential candidates lacked transparency. The NLD is Aung San Suu Kyi’s party that won the general elections last year. Biographies of the NLD candidates were not provided early in the process. There was little communication directly with the media, which then spurred misinformation. At times, the party leader even displayed an attitude of disdain towards the media.

If anyone had hoped for a quick-response NLD public relations team during the nomination process (or even during the elections), they were certainly disappointed.

One could assume that the NLD’s caginess in divulging information was an attempt not to antagonize the opposition military bloc, which still holds 25% of seats in the parliament.

Yet perhaps the tone has also been set in the way the NLD will handle its dealings with the media in the future.

The new government has inherited a mixed-bag legacy of dramatic reforms meted out by the former Thein Sein government. Repression of activists and student protesters, nonetheless, has continued since the November 2015 elections. A civil war is escalating in Kachin and the northern Shan States and everyday citizens have seen little socio-economic progress.

Htin Kyaw in his inauguration speech on 30 March highlighted “national reconciliation,” “peace in the country,” and “emergence of a constitution” as his key priorities. He didn’t cover in his brief three-minute speech the details of how all this would be tackled.

What is heartening, however, is the appointment of former journalist and member of the Myanmar Media Council, Pe Myint, as the new Minister of Information. In an interview with The Irrawaddy, he promised to ensure more press freedom, a more competitive media environment and that journalists “are not punished for their work”.

Logistically, it is a more difficult story.

The legal framework in Myanmar needs to be reviewed entirely. Constitutional changes are likely to be at the core of NLD’s priorities, perhaps to allow Aung San Suu Kyi to rule in the top-down fashion she has already displayed.

Meanwhile, journalists are still pushing for changes to a controversial Broadcasting Law that sees the Ministry of Information retain power over the country’s largest (state-controlled) media. The Telecommunications Law has also been used to detain and imprison activists, creating a climate of fear for those who engage in social media and online reporting.

Myanmar’s religious offense laws also require revision. This is a mammoth task as the country’s hardline Buddhist nationalist groups are growing in power and influence, fueling religious intolerance and xenophobia.

Yet the general attitude of journalists in Myanmar is positive – change is coming. Whatever that change is, surely it will be better than before.
Challenges remain but both the media and public alike seem to want to shed the negative environment that for so many decades hindered Myanmar’s ability to reform.

The game is still one of waiting and watching, but what is certain is that any changes that come will be “direct orders,” with tacit approval from Aung San Suu Kyi.

Taking into consideration Aung San Suu Kyi’s several ministerial posts (four in total), her position as party leader and her proposal to become state adviser in chief, reform of Myanmar’s media will happen, but slowly.