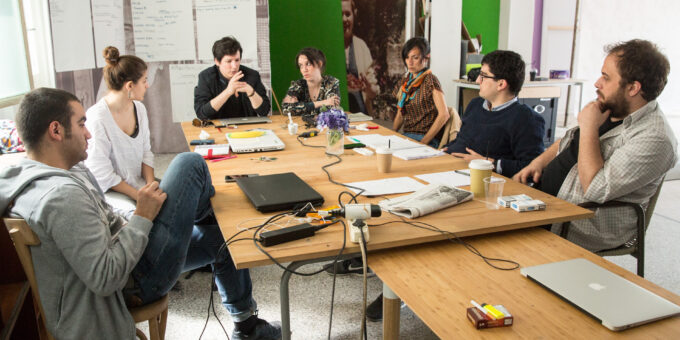 The pathetic state of Greek journalism is not a mystery to anyone anymore. The number of disgruntled readers looking for fresh journalism is growing and stories from Greece aimed at foreign audiences are poor or slanted. Now, AthensLive wants to change all of that.

Tassos Morfis, Angelos Christofilopoulos, Yannis Drakoulidis and Gerry Domenikos are a group of journalists and photographers living in Athens who have, in the past few years, grown increasingly frustrated with the state of Greek journalism, but also with the quality of news that comes out of Greece to the broader, international public.

“The year 2015 was a very turbulent year for Greece,” says Mr Morfis in a presentational video. “We had elections twice with a radical left government getting elected, we almost got kicked out of the eurozone, we had a referendum and now we are dealing with a huge refugee influx.”

But that is all already known.

Hence, they decided to create one.

Taking It to the Next Stage

The four friends were joined last year by Sotiris Sideris who returned to Greece with an MA degree in new media from the University of Amsterdam. In April 2015, they launched AthensLive, a blog that hosts their stories, in English, about Greek political and economic realities.

Some of them have been struggling to make a living as freelancers, others were not paid by their employers and others managed somehow to survive economically between jobs. They have decided to focus on their new project for the last six months to prepare AthensLive, while telling the real Greek story from the ground. Now, the only sources of information in English about what’s going on in Greece is foreign news media that reports only when something really dreadful happens, such as violent riots or banks collapses triggering people’s rage; translated sites of local media that are not independent; and social media, which, in Mr Morfis’ view, is not a proper journalism outlet.

So far, AthensLive has grown mostly on social media. They didn’t even register as a legal entity. But with over 10,000 likes on Facebook and a contagiously enthusiastic followership, they want to take AthensLive to the next stage. In early April 2016, they launched their first crowdfunding campaign, aiming to pull in some €60,000 (US$68,000) to pay for their time and work-related expenses.

Independent journalism in Greece has been in a dismal state for years. In the 2015 World Press Freedom Index, put together by the Paris-based press freedom group Reporters Without Borders, Greece was in 91st place, the second-lowest ranking for a European Union (EU) country after Bulgaria. It plummeted 51 places between 2009 and 2014, a period when journalists were dragged to court for their work and pressures on independent journalists have grown.

A 2015 report from researchers Petros Iosifidis and Dimitris Boucas found that journalism was ravaged by the widespread patronage system in Greece. Hellenic Radio Television (ERT), the country’s public broadcaster, was shut down in 2013 and income of private media outlets plummeted, leading to cuts in the journalists’ pay and thus making them more vulnerable.

The Greek media market is in the hands of a few groups with powerful interests. They include publishing groups Lambrakis Press (owner of TA NEA), the Alafouzos family (owner of Kathimerini), and Pegasus controlled by Bobolas family (owner of Ethnos).

Cross-media concentration, meaning companies owning different types of media, is high as newspaper behemoths have gradually expanded into electronic media, making hay over weak and inconsistent regulations. Two of the largest press companies by revenues, Lambrakis Press and Pegasus, have also stakes in Mega Channel, the most popular station in the country. Press Institution, another publisher, controls shares in Star Channel and the Alafouzos family owns Skai TV.

In such a blighted media market, there is a growing space for quality journalism, which the swashbuckling founders of AthensLive want to fill.

No Strings Attached (So Far)

AthensLive wants to publish stories about Greece that are not found in foreign and Greek press. They want to bring innovative methods of journalism to Greece such as data journalism. They target audiences across Europe, in the Greek diaspora, expats living in Athens as well as readers in large English-speaking markets such as the U.S. and Australia, who are interested in Greece.

But at the same time, AthensLive is also poised to win over readers from Greece in a move to challenge the current narrative about Greece in the mainstream media. “Basically, AthensLive will be publishing what is missing from the Greek [media] outlets,” says Mr Morfis. Without a political agenda that would stunt their coverage, they are convinced that they can touch on any social, political, economic and cultural story.

But AthensLive is not alone.

With a growing number of disenchanted readers seeking fresh sources of information, several independent voices are emerging in Greece. Journalists sacked by a left-leaning daily have started Efimerida ton Syntakton (Editor’s Newspaper), their own editorial shop. Other new initiatives include Unfollow and the Press Project.

Now, it is time for AthensLive to carve its own space within this swelling niche. They hope that the funding from the ongoing crowdfunding effort will give them the space to properly plan AthensLive for its cruise over the next few years. “The ideal scenario would be to be able to live only from AthensLive and take it further,” Mr Morfis said.

As experiences in other countries show, that is the next wise thing to do. While hopefully public discontent will ebb, AthensLive will only survive if they can use the current climate to build a strong foundation.