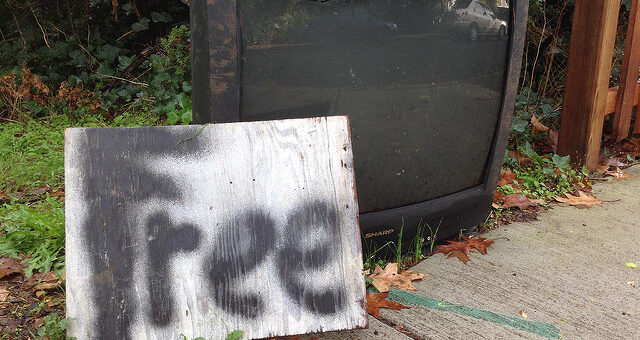 As massive batches of viewers, particularly young ones, give up watching traditional TV, the broadcasting business is rapidly crumbling. For television news stations, that is a very bad omen.

When direct-broadcast satellite provider Dish Network launched  Sling TV in February last year, it was eying those swathes of viewers able and willing to pay for television, but not the fat bill that pay-TV companies send their subscribers at the end of the month. For a monthly fee of US$20, Americans can access a bouquet of TV channels anywhere and on any device through Sling TV, including mobile devices and computers. They don’t have to install a hulking antenna or satellite dish on the roof of their house.

In mid-April 2016, Dish Network threatened that it would cut its viewers’ access to the cable channels operated by Viacom. Dish Network was reportedly irked by requests from Viacom for an unreasonable increase (“millions of dollars,” according to Dish Network) in fees for carrying Viacom-owned channels such as MTV, Comedy Central and Nickelodeon in spite of the decreasing audiences of these channels. In the end, they reached a deal.

The Sling TV venture and Dish-Viacom tussle are more than business as usual. They epitomize the jouncy ride the television business is having these days; not only in rich markets like the U.S., but increasingly, everywhere. The reason: consumers, particularly ballooning young audiences, have stopped watching the television diet fed to them on TV sets.

That is good news for some of the fast-growing online video providers. But for the television news industry, it practically means its demise.

Television has been losing viewership at a brisk pace, particularly in recent years. In the U.K., television viewing time tumbled from a high of 241 minutes a day in 2012 to 216 minutes a day in 2015, a 10% decline in just three years, according to a recent study from the Oxford-based Reuters Institute for the Study of Journalism (RISJ). The decline in TV viewing time in the U.S. was roughly 15% in the same period. Similar drops have been experienced in other technologically advanced countries in Europe.

The TV decline is comparable to the decrease in print newspaper circulation in the 2000s, according to Rasmus Kleis Nielsen and Richard Sambrook, the authors of the RISJ’s study. They found that compounded over ten years, TV’s decline in the U.K. and U.S. was even higher than the newspapers’ descent: up to 30% for TV against 20% for newspapers.

An increasing appetite for video streaming prompted the premium cable network Starz to launch the video streaming service Starz Play Arabia one year ago across 17 countries and territories in the Middle East and North Africa (MENA) region, a market of some 370 million with a hefty, increasingly connected, youth population.

But what is driving these changes? Generational shifts seem to be the simple answer.

Television audience “is eroding, aging, and spending less time watching television,” according to Nielsen and Sambrook. The average age of people watching BBC’s flagship channel BBC1 has grown by more than one year every year, from 52 in 2009 to 59 in 2014. Youth aged 14- to 17-years old have abandoned TV screens at a rate of 33% for movies and TV shows, along with 11% of those aged between 35 and 54, according to a 2015 study from Accenture, a consultancy. Last year in America, the median age for viewers of Fox News and CNN was 67 and 62, respectively.

So, why are viewers moving away from their TV sets? Better devices and connections are luring consumers away from the sofa and their TV set. “Distributed viewing”, meaning consumption of videos from different brands and content creators on video-sharing platforms, social media sites and via messaging apps, spiked in 2015. YouTube alone had more than 8 billion daily video views and the messaging app Snapchat reported 6 billion daily views last year, according to the RISJ’s report.

A key driver behind the growth of distributed viewing is the spread of mobile technology. More than half of all mobile data traffic in 2015 was generated by videos, according to Cisco, a technology company.

But at the end of the day, the television industry drama is, to some extent, to blame on television players themselves. Many of them moved too slowly to meet emerging audiences and behaviors. They strongly believed that their strong brands, wealth of in-house talent and their traditional audience loyalty were enough to keep them in business. Even today, large broadcasters such as BBC or CNN give people more text and images than video on their internet sites.

Many of the on-demand content operations are still dwarfed by the size of the traditional broadcast groups. But this is going to change fast. “There is no reason to believe that a generation that has grown up with and enjoys digital, on-demand, social, and mobile video viewing across a range of connected devices will come to prefer live, linear, scheduled programming tied to a single device just because they grow older,” according to Nielsen and Sambrook. Now a professor, Mr Sambrook was a BBC journalist for nearly 30 years.

Digital video packagers are most likely to benefit from that. An on-demand content provider, Netflix, is poised to invest US$ 6bn in content in 2016, more than almost any large broadcast group, including BBC and ITV in the U.K. or ARD in Germany.

When it comes to drama, sports and entertainment, consumers will only benefit from the increasing competition and diversity. But for television news, the new realities are a major challenge. Loss of viewers has prompted many private broadcasters to slash their budgets for news production.

RISJ’s experts recommend to them to experiment with new distribution models. For many, if not most of them, the advice might already have come too late.