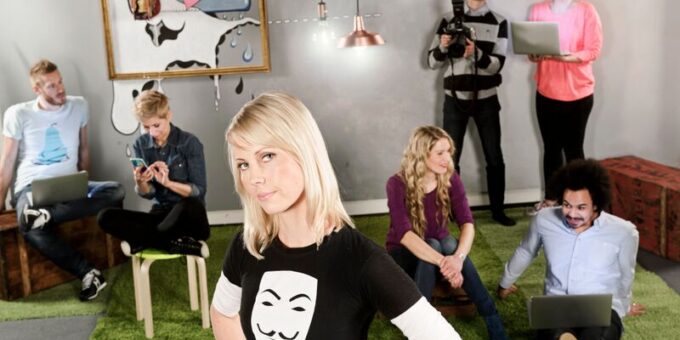 Aro specializes in Russia, information warfare, security and extremism. Back in 2014, she started a crowdsourced investigation of pro-Russia info war trolls and a St. Petersburg troll factory. She then became the target of serious harassment by pro-Kremlin propagandists. Now, she is working on a brand new investigative book on the information warfare waged by the Putin regime.

Q: How did you become interested in covering media and power, in your case Russian propaganda?

Jessikka Aro: As a child I was already interested in Russia and Soviet Union because my grandmother told me about her experiences of having to evacuate herself from her home in Karelia, when the Soviet Union started to occupy Finland in her youth. Later, I befriended people who had lived in the Soviet Union, not so far from Finland, and [saw] how their society had been totally different from Western society.I found their stories extremely interesting – as well as a bit scary – so I started to study Russian and study more about Finland’s big neighbor.

Later in my career, I became interested in how people’s minds and therefore their actions are influenced by disinformation, lies and deception.

The concept of psychological warfare, systematically agitating people with non-violent, but military techniques started to really interest me when I was covering the Georgian war in 2008, and a lot of misinformation was being distributed. As a foreign affairs journalist it was extremely difficult to clean the propaganda away from the war news reports and check the facts in a busy war news situation, so I started to really pay attention to the topic.

When the Russian-waged war in Ukraine and illegal annexations started in 2014, I noticed the same effect: Russia’s political leadership spread massive amounts of lies to manipulate people’s ideas and conceptions of the war. I also read stories about the Russian troll factory, and in September 2014 I started to investigate the then latest technique of information warfare. I saw the professional social media propaganda factories as a serious threat to freedom of speech as well as access to information and wanted to find out how successful they were in manipulating people even outside Russia’s borders.

Jessikka Aro: There are too few resources in proper investigative and critical journalism. Globally, media companies are firing reporters and cutting off what they see as costs, so there is a big risk of the quality of journalism worsening. At the moment the trend should be the opposite: significantly more resources should be invested in thorough investigative, fact checked and analytical articles. Now many journalists are encouraged to make quick articles based only on one source, and even an unreliable source, and in the most tragic cases journalists have become merely propagandists’ loudspeakers, only repeating what one source is saying without any criticism – instead of finding out what is the actual and factual truth.

A journalist’s job is to find out and publish only checked facts. There are many professional propagandists and PR people who want to exploit the media to get coverage for their own agenda. Therefore, it’s crucial that journalists regain their position as gatekeepers of publicity and watchdogs of political institutions. Of course, there are many world class journalists still doing proper journalism, but critical and analytical reporting should be the norm in every news outlet.

In Western societies, where freedom of speech is still guaranteed, journalists are free to pick the most relevant and important topics and cover them; but it seems not all journalists or newsroom managers value press freedom, as I see a lot of stories covered very lazily and even press releases copy-pasted and published as news articles. It’s got nothing to do with real journalism. So I want to encourage everyone to find interesting topics and dig deep. For me, finding my own scoops and publishing them is professionally the most satisfactory thing.

Q: What are some positive developments in our field, journalism and the media in general? Who — individuals, organizations, or movements — are making a difference right now?

Jessikka Aro: I would like to honor the independent, critical and courageous journalists covering corruption and other high profile problems inside Russia at the moment, in spite of the threats, harassment and violence they are facing. They are a true inspiration to me and I can only admire them as well as follow their example.One of my all-time idols and professional influencers is the Novaya Gazeta reporter Anna Politkovskaya, who covered Putin’s regime’s wrongdoings and Russia’s development as an authoritarian state. Later she was murdered, but her legacy is still strongly alive. I have read all Politkovskaya’s books and recommend them to every journalist as mandatory reading.

All investigative reporters relentlessly covering even the most extreme and complex problems around the world are making a huge difference in their communities. They are uncovering the facts authoritarian political leaders and corrupt criminals would prefer to keep hidden – brave journalists are providing the public access to accurate information. Factual information and freedom of speech are the basis in which democracy, freedom and healthy societies can be built, so journalists fighting and countering political and outside pressure by publishing facts are actually tasked with very important work: securing basic human rights.

Jessikka Aro: I would ask myself the question I’m often asked: “aren’t you afraid something bad will happen to you because you’re covering such dangerous topics and you have been threatened?”

My answer: yes, sometimes I am afraid. But I understand, that fear is nothing more than a feeling – a mere product of my own imagination – and I don’t let my personal feelings dictate my professional decisions. It’s basic journalistic professionalism to continue working in spite of a journalists’ own feelings. Journalists are targeted, abused and harassed all the time to prevent them from performing their investigations, but it’s important not to let an outsider manipulate and control you with fear. Fear also easily leads to self censorship. And after all – imagine where it would lead us, if all journalists could be silenced by scaring them? The bad guys would take over. And no-one wants that.