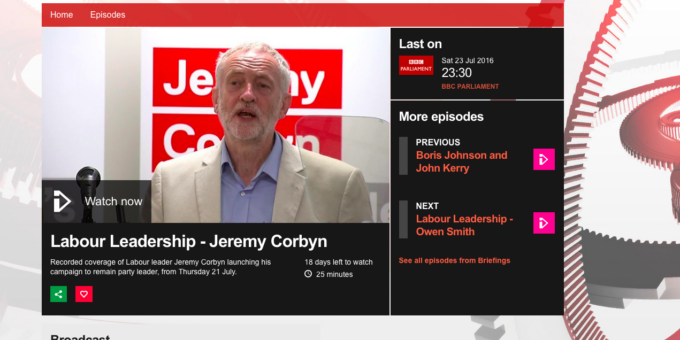 Researchers point to clear and consistent bias on the main BBC bulletins in favor of critics of Labour Party leader Jeremy Corbyn following a wave of shadow cabinet resignations after the UK decided to leave the EU.

The BBC, the U.K.’s flagship broadcaster, has been for decades a model of inspiration for other public media supporters across the globe. The public broadcaster was lauded for its governing structure, which prevented political interference, and for its funding model, which ensures stable, long-term financing. But above all, the BBC garnered kudos for its unbiased, objective, fact-anchored reporting – a paragon of independent journalism.
In recent years, however, the BBC has come under increased critical scrutiny for its slanted coverage. A recent study by the Media Reform Coalition (MRC) and Birkbeck, University of London, browbeat the British broadcaster for its “consistent bias” against Jeremy Corbyn, the leader of the Labour Party.

The study’s findings are worrisome not so much because of the target of the bias, an opposition politician, but for how the BBC is performing its public service media role.

The broadcaster enjoys healthy ratings and commands trust among large swathes of viewers.

The broadcaster thus has the power to shape agendas and public opinion. When it does so in a slanted manner, it’s a big problem.

In the aftermath of the Brexit vote last June, MRC and Birkbeck analyzed TV and online news during the 10 days after many of Mr Corbyn’s shadow cabinet resigned. The researchers accuse the BBC of devoting twice as much airtime during some of its programs to Mr Corbyn’s critics and political foes as to his supporters (for example, in the BBC’s flagship TV newscast at 6 p.m.) In contrast, ITV, another mainstream TV station in the UK, had a “relatively balanced” coverage of this issue, according to the researchers. Also, the report found, the most balanced outlets in this regard were those that don’t operate on legacy media platforms, International Business Times, the Independent (which became an online-only media last February) and the Huffington Post.

When it comes to the BBC, “one of the most striking patterns that emerged was the repeated use of language that invoked militarism and violence,” according to the report. “BBC correspondents tended to ascribe militancy and aggression exclusively to Jeremy Corbyn and his supporters rather than Labour rebels, in spite of the fact that the leadership was, throughout this period, largely on the defensive in responding to attacks and accusations by rebel MPs.”

Justin Schlosberg, who authored the report, recommended the BBC that it revise its editorial guidelines when it comes to political controversies on news programs, in particular those having to do with descriptive labels for political views. Mr Schlosberg wrote that the broadcaster should offer caveats when reporting on single, unnamed sources. For example, in one newscast, BBC reporter Chris Mason referred to a dossier he had received from one of the shadow cabinet ministers who had resigned that showed declining support for Mr Corbyn. Yet Mr Mason didn’t caution viewers that it was likely to be a one-sided perspective.

Some experts and politicians have pointed out in recent months that the BBC has increasingly intensified its bias against Labour as they feared repercussions from the party in power, the conservative Tories, who last spring reviewed the BBC’s charter, the broadcaster’s constitutional basis. The existing one expires at the end of 2016.

Some Labour politicians last May accused culture secretary John Whittingdale, in charge of leading the charter’s review, of bullying the broadcaster. On 12 May, he unveiled a blueprint for the future of the BBC that was, on the whole, much less controversial than expected. Among other things, it secures the license fee for the next 11 years, introduces a new mission statement for the BBC to add “distinctive content” among the broadcaster’s products, and obliges the station to publish all pays for employees and journalists of over £450,000 (US$600,000) per annum.

However, there is one contentious issue in Mr Whittingdale’s blueprint. The BBC Trust is to be replaced by a new unitary board where the government wants to appoint six members out of a maximum of 14. Although the BBC itself will be able to appoint at least half of the board members, the broadcaster’s leadership has expressed fears that the new arrangement would allow authorities to meddle in the station’s work.

Another opinion among media experts and political observers is that the BBC’s coverage of the Corbyn leadership crisis was part of the wider anti-Corbyn mood among the country’s media. Even Labour-supporting newspapers such as the Guardian and the Mirror officially called on Mr Corbyn to resign for contributing to Brexit (the UK’s exit from the EU) by campaigning ineffectually for the “Remain” camp.

But for a public service channel – with the trust and audience of the BBC –, such biases were out of step, according to study by the MRC and Birkbeck. A corporation spokesperson told HuffPost UK that they were confident that their coverage during the Corbyn crisis was impartial, adding that the research was selective and that MRC was a “vested interests group.” The MRC, based at Goldsmiths, University of London, says that it is not officially aligned with any political party. Professor James Curran is among its founders.

The BBC’s response to the study was rather dismaying, even baffling, coming from a broadcaster that is supposed to serve and engage with the public.