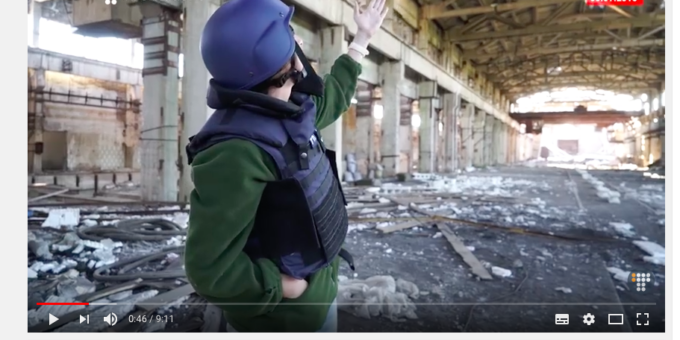 The lack of definitive rules of engagement and professional standards for Ukrainian public media covering a quintessential topic of national interest – the ongoing war against Russian-backed separatists – also raises questions of self-censorship.

Among the heralded achievements of the Ukrainian Revolution of Dignity, the mass protests in 2014 that led to the ousting of Ukraine’s then president Viktor Yanukovych, was the emergence of two public broadcasters.

However, neither of them, in fact, fits the classic concept of the public media. One was created by journalists as a bottom-up initiative, and is still in the process of reforming. The other is being built by the government on the structure of the Ukrainian state TV and radio corporation. Both still fall short of international standards.

The outlet established by the journalists, Hromadske (which means “public” in Ukrainian), is more accessible and popular among youth living in big cities. The state-administered one, UA: Pershyj (meaning “Ukraine: First” in Ukrainian), is accessible nationwide, but it is struggling to shed its legacy from the Soviet times.

Although the Ukrainian media market boasts a plurality of private outlets, there is an urgent need for a full-scale public media outlet that can compete with the commercial media owned by the country’s oligarchs, particularly since the start of the war in eastern Ukraine in 2014.

All Ukrainian media have covered the ongoing war in Ukraine extensively, but since the (“frozen”) conflict has become less intense, the media attention has decreased dramatically. Fresh violence earlier this summer attracted renewed coverage. It led, among other things, to an open conflict between the military and journalists over the idea of public interest and the role that public media should play in serving it. It is a rare case in Ukraine that the army and journalists have come into conflict over this issue.

In early July, a group of journalists happened to be in the hottest war spot in Ukraine, the city of Avdiivka, near the separatists’ stronghold of Donetsk. Shelling by separatists that killed two Ukrainian soldiers was filmed by a Hromadske crew and by a Russian journalist, Yuliya Polukhina, from the independent newspaper Novaya Gazeta, who was first to broadcast a dramatic feed featuring dead soldiers on its website. The footage was comprised of raw video showing the corpses of Ukrainian soldiers; parts of the video also helped identify their positions and equipment – and faces.

A few days later, military spokespersons accused Ukrainian journalists of violating all professional standards as they had revealed sensitive information that could help “the enemy”. They also browbeat the Ukrainian journalists at the scene for “hiding” their Russian colleague. That accusation was later rebuked when it was proved that Ms Polukhina had all the accreditation and documents issued by Ukrainian authorities necessary to work in the war zone.

In their defense, Hromadske’s journalists argued that they had not in fact released any of the video feed as they were still awaiting army approval to do so. Novaya Gazeta, on the other hand, argued that they went ahead with releasing their video footage because it was in the public interest to document violations of the Minsk Protocol, a ceasefire agreement signed back in 2014 by representatives of Russia, Ukraine and two newly self-proclaimed republics within Ukraine. Ms Polukhina’s footage, in fact, shows that the Minsk ceasefire agreement was not being honored. Novaya Gazeta also notes that troops were aware that the filming was taking place and agreed to its broadcasting. Ms Polukhina even insisted that she had followed all the military’s orders.

The Fog of War Coverage

Ukrainian military authorities announced later in July that they would withdraw the right to work in war zones for both Hromadske’s journalists and Ms Polukhina. This incident has stirred heated public debates on the role of journalists. It has also shown that there are still no basic journalistic standards accepted by media and the public in Ukraine.

It eventually took 20 days for Hromadske to prepare a final version of their story, for which they sought approval from the army to broadcast. As journalists later revealed, the video was also approved by relatives of the victims. Compared to Novaya Gazeta’s footage, Hromadske’s seems heavily sanitized, apparently at the request of the military. Many images were blurred to hide identities and locations.

Although this clash over the media product led to a nearly almost three-week delay in broadcasting the footage, taking into account the high public interest, its impact did not diminish.

It is worth noting that Ukrainian militaries censored the video even though the same shots were published earlier by the Russian newspaper, and hence it was a moot point. Furthermore – and further clouding the debate –, Ukrainian journalists had not signed any embodiment agreement, at least not publicly. The incident may have revealed a deep level of self-censorship among journalists in the Ukrainian public media. It is in the public interest to determine the truth.