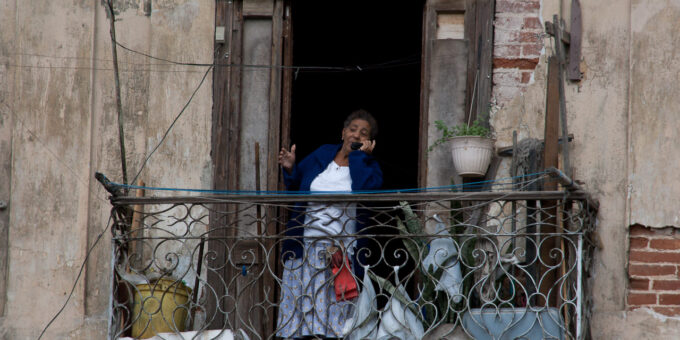 Bad internet connections, pricey internet packages, censorship, suppressed freedom of expression and content blocking: this is Cuba. How come, then, Cubans are such a well-informed crowd? Hackers and offline social networking are the answer.

In the past, it was illegal to own a computer in Cuba; and it was hard to buy one. Because of the U.S. embargo on Cuba, imports of technology were blocked. But in a landmark decision in 2008 when Raul Castro took over the government from his brother Fidel, he allowed Cubans to have computers and cellphones.

Eight years later, Cuba boasts a vibrant media content-sharing culture. But these exchanges take place mostly offline. Content from international media, which are fully blocked by Cuba’s government, is feverishly shared through pen drives passed from one to another across the country. The government has turned a blind eye to this growing system of information distribution.

But how do these half-secret, real-life social networks of content distribution really work? The offline world is the answer.

A Heck of a Solution

An isolated island with 11 million souls, Cuba has been grappling for years with poor net connectivity and prohibiting prices for internet access, a result of government policies that aimed to keep Cubans away from the cyberspace. Independent journalism in print and broadcast is virtually inexistent. Add to that years of draconian censorship, blatant suppression of freedom of expression and systematic content blocking and one would expect an uninformed populace manipulated by the regime.

That is not the case.

All these limitations have instead helped create a bustling hacker culture that generates an uninterrupted flow of free and diverse information that most Cubans are hungrily tapping into, according to a recently released report of the Center for International Media Assistance (CIMA), a Washington, D.C.-based think-tank.

“Many Cubans have shown themselves remarkably well informed about the outside world, in ways that cannot be explained by their traditional media offerings,” the report concluded. Produced by professor Anne Nelson and a group of students and researchers from Columbia University in New York, the report distills two years of investigations, including field work in Cuba.

To go past limitations on content distribution, Cuban hackers took an inventive approach: they rely heavily on offline mobile apps to share content that they hack from the internet, thus leapfrogging  the country’s antiquated 2G network. With wifi connections in short supply and expensive to use, content is  being shared mostly through Bluetooth, from device to device.

One of the most popular apps among Cubans is Zapya. It allows users to connect two or more phones to share files. Many of these offline apps carry out functions that outside Cuba require an internet connection. One of them is IMO, which permits video chatting in low connectivity settings. That is a good alternative to a Skype service, which is available only on an erratic basis in Cuba.

As electricity is also a problem in Cuba, solar mobile phone chargers have been invented. Pilfering signal has spread fast. Hackers enter wifi hotspots of government institutions and feed wifi signal to homes.

“People are finding innovative ways to communicate,” Mariela Machado, a member of CIMA’s research team, said at the Washington, D.C. launch of the report on 14 September 2016. “You can have this information leaked by two or three people and then multiplying from phone to phone [without the] need of internet. They are creating their own networks without the connectivity we know in social networks. Everywhere you go, they [Cubans] will ask you: can you share apps? They have 60 to 80 apps on their phones that I have never seen in my life.”

Ms Nelson considers that other people in countries with low connectivity, particularly closed societies or authoritarian regimes in Africa, Asia and Latin America, could learn from Cuba’s hacker culture.

Media in a Package

Another method to disseminate free content is via flash drives. El Paquete (The Package) is a widely used service in Cuba that requires no connection at all. It consists of a cornucopia of content including movies, music, website content, newspapers articles, TV shows, sports programs and soap operas. All that content is transferred through flash drives or from hard drives to laptops. A one-time update of all this content costs roughly US$ 2. Popular fantasy drama Game of Thrones or Netflix series such as House of Cards are part of this package.Ms Nelson believes that the pirated content that fills El Paquete is downloaded in the U.S. and then sold and distributed in Cuba. It travels through personal interactions via real-life networks of family, friends, colleagues and neighbors. It is the equivalent of a local newsstand that changes depending on the community it serves.

It all comes in El Paquete.

Most surprising is that the circulation of such prohibited content on the island has been tolerated by the government. They initially reacted against the service, but eventually chose to let it flow so long as it does not promote “counter-revolutionary” content. “They don’t stop the package, but nobody in the government helps to make the package,” Elio Hector Lopez of El Paquete told the Canadian Broadcasting Corporation (CBC), Canada’s public broadcaster. No law defines this activity as illegal. Therefore, until that changes, El Paquete is known in local circles as an “a-legal” product.
It’s hard to predict what will happen with El Paquete on a longer-term. Some fear that, as it happened in other markets, once audiences get used to free content, it will be difficult to convince them to pay for such content.
But the bigger question is what Cuba’s media will look like when, hopefully, the country moves fully towards free market. Distribution is going to be major part of that.

In building its communications infrastructure, Cuba has traditionally cooperated with suchlike states: first the Soviets, later Chavez’s Venezuela. China has also served as a hidden hand in Cuba’s modernization, according to CIMA. In a 2015 report, Larry Press, a leading expert on Cuban communications, said that, “Cuba has turned to China, not the U.S., for internet connectivity and equipment, and is committed to doing so in the short-term future.”

Mr Press said that it won’t be easy for the U.S. to compete against the Chinese in Cuba. “That is one of the hidden costs of the U.S. embargo,” Mr Press wrote.

Cuba connected to the internet in the mid 1990s, but access was extremely limited. As of 2007 when a new fiber optic cable was brought to Cuba, the situation has improved. The cable was an investment of Telecomunicaciones Gran Caribe, a partnership between state-owned companies Telecom Venezuela and Cuban Transbit. Alcatel-Lucent Shanghai Bell, a Chinese-owned company, was commissioned to build the cable system.

But one cable is not sufficient. A mere ship’s anchor could easily cut it and disconnect the country from the internet, Ms Nelson wrote in the CIMA report.

Americans have tried to weigh in. Back in 2014, Google’s executive chairman, Eric Schmidt, traveled to Cuba to talk with government officials about the potential for the internet in Cuba. Mr Schmidt’s visit coincided with secret White House negotiations with Havana to reopen relations. When Mr Schmidt returned to America, he called on the American government to lift the embargo. Soon after, Google began to launch products for Cuba that didn’t violate trade restrictions such as web-based services that didn’t require financial transactions. They included Google Chrome and Google Play.

But Mr Schmidt’s visit left Cuban officials unimpressed. Jose Ramon Machado Ventura, then first vice-president of the Council of State in Cuba, warned that the offer for free internet from foreign states is not a way to help Cuban people communicate, but “a way to penetrate us and do ideological work for a new conquest.”

America has initiated several projects to bring internet to Cuba. Fiber-optic links were established in the American military base at Guantanamo, but it’s unlikely that the Cuban government would approve any internet project from the U.S. any time soon.

Ms Nelson believes that the introduction of the PayPal online payment service a few months ago could be transformative in a country totally cut off from any form of e-commerce. The Cuban government has problems with freedom of expression, but desperately needs revenues to move ahead. So, that could be a way to enter the country, Ms Nelson added.

Whatever the government or foreign investors will do, the Cuban hacker culture is likely to shape much of the country’s future media and with it, its journalism.