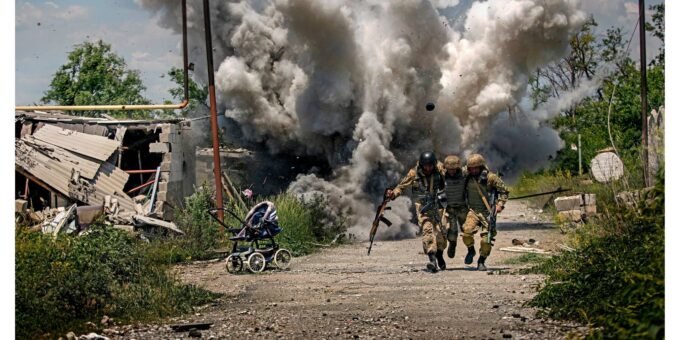 A photo taken by an amateur photographer in the Ukrainian village of Shyrokyne reignites the debate on journalism in conflicted areas: should we stick to the facts or lie?

A huge explosion in the background, two soldiers supporting their wounded friend in the foreground, an empty baby carriage in the left corner near the ruins of someone’s house; and contrasting to this dramatic picture you have the blue summer sky of eastern Ukraine.

This impressive photo has become popular as an illustration of the failed ceasefire in the Ukrainian village of Shyrokyne where the Ukrainian army is constantly fighting with the pro-Russian separatists. Taken in June 2016, this photo was shared thousand of times by internet users. It was republished by many media and lobby group leaders such as renowned activists and war volunteers. The war volunteers are people who supply goods to the Ukrainian army. They have become very influential in society since the start of the war in 2014.

Taken by Dmytro Muravsky, a Ukrainian volunteer and former advisor to the defense ministry, this photo has also attracted heavy criticism from a group of Ukrainian photographers who work for Ukrainian and international media. They slammed Mr Muravsky in a public letter, accusing him of staging the picture.

Smile (or Cry) for the Camera

Efrem Lukatsky of the Associated Press (AP) told Radio Liberty/Radio Free Europe that in taking this photo, Mr Muravsky used a tripod, which means that he prepared for it as if he was waiting for the explosion. Flying stones are caught in the photo as if the photographer knew about the explosion in advance, Mr Lukatsky said. He even suggested that pyrotechnics experts support these arguments, but he wouldn’t elaborate on that.

Mr Muravsky rejected these accusations in an interview with Radio Liberty/Radio Free Europe, but admitted that he was not aware of rules on documentary-making or how staging photos is defined. Mr Muravsky is not a professional journalist. He is a photo amateur, but his photos from the conflict zone were published by different Ukrainian media outlets as well as by Ukraine’s defense ministry.

So, why were Ukrainian photographers outraged?

They argue that by using staged photos, the Ukrainian government and media manipulate the public. They compared such tactics with the style of LifeNews, a Russian news website and TV station, owned by News Media Holding, which is known for its servile attitude toward the Kremlin. They found these attempts by the defense ministry to participate in the information war clumsy at best.

At the end of August, following the photo-related ruckus, Mr Muravsky was fired from the ministry. Authorities argued that the scandal that the photo led to could have negative consequences for Ukraine internationally. The country could potentially be seen as staging the facts of Russian aggression; and that could ruin the country’s reputation.

The Shyrokyne photo saga stirred a heated public debate on whether it is acceptable to use staged photos for covering the war in eastern Ukraine. Some find that completely fine. They argue that since Mr Muravsky does not work for media, it is acceptable for him to use staged pictures. Mr Muravsky’s photos were described as “inspirational images”, a form of art that does not need to be documentary. Another popular argument among those who agree with staged photos was that war establishes its own standards and things that are not accepted in journalism are accepted in how communication works during conflict.

A prominent Ukrainian war volunteer, Roman Sinicyn said on his Facebook timeline that Mr Muravsky did that on his own, using his own resources and not asking for any honorarium for this work. He doesn’t sell his photos to news agencies. He simply publishes photos on his own online platforms. “He is doing quality propaganda, which we lack,” Mr Sinicyn said.
But there were also many who criticized Mr Muravsky. They argue that Ukrainians should the highest standards in covering the war.

However, the Shyrokyne photo story points to much deeper problems with which Ukrainian journalism on the whole is faced. Ukrainian media expert Otar Dovzhenko, who heads the Journalism Master’s Program at the Catholic University in Lviv, says that the debate around what Mr Muravsky did reveals a more terrifying truth: there is a growing amount of educated, intelligent and often influential people in Ukraine who will gladly allow the state to lie for them if it is done for the sake of national security.
For journalism, that is an incredibly terrifying reality.