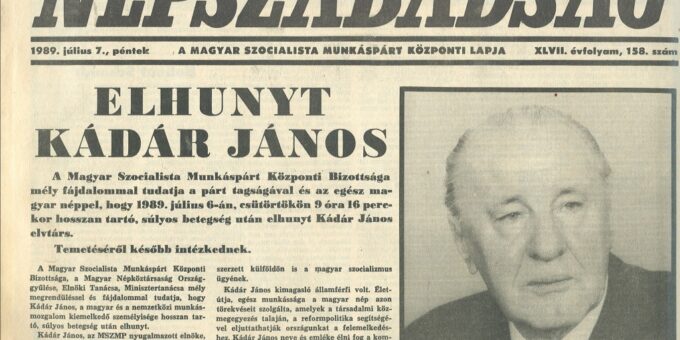 Nepszabadsag’s publisher, Mediaworks announced that it has suspended the paper’s operations. This is arguably the biggest event in Hungary’s media history since the collapse of communism back in 1989.

Last Tuesday, the leftwing daily newspaper Nepszabadsag reported that Antal Rogan, known as the “minister of propaganda” in Hungary’s Viktor Orban government, travelled by a luxury helicopter to a wedding in Szabolcs county, northeast Hungary. Nepszabadsag published a raft of photographs featuring Mr Rogan and his wife, Cecilia and one of their children coming out of a helicopter and getting into a black Mercedes.

Mr Rogan denied these claims. He said that the newspaper must have confused him with somebody else. He also threatened to sue anybody who reported further on it. Mr Rogan reportedly went to the wedding of Zsofia Szabo, a local TV star, who is a friend of Cecilia Rogan. Mr Rogan must have spent some US$ 5,500 for the ride, according to information from the company that rented the chopper. That is a hefty sum in a country where average net salary is worth some US$ 600.

Mr Rogan was in charge of the coordination of the media campaign that was aimed at encouraging Hungarian voters to participate in the anti-EU refugee resettlement quota referendum on 2 October 2016. The Orban government spent a mind-boggling HUF 11.3bn (US$ 40m) on government propaganda before the referendum. As fewer than 50% of Hungarians went to vote, the referendum was a washout.

Hungarian officials in the Orban government are known for being hypersensitive to criticism. It is no coincidence then that Nepszabadsag is folding. The report on Mr Rogan was only one in a series of critical articles about people close to the political power in Hungary that the daily has published.

Nepszabadsag is one of the longest running newspapers in the country. It was founded back in 1956. Mediaworks bought Nepszabadsag last year after the local media regulator allegedly forced the former owners, the Swiss publishing house Ringier, to divest some of its holdings. Before Ringier, the newspaper was controlled by Socialists. Mediaworks is controlled by Vienna Capital Partners (VCP), a Vienna-based corporate financial investor. Mediaworks owns also a network of regional dailies in Hungary.

According to an official Mediaworks news release, the closure of Nepszabadsag was dictated by financial reasons. The newspaper, its owner says, couldn’t “achieve economic success.” They say that Nepszabadsag has lost 74% of its sold circulation in the past 10 years. That means more than 100,000 copies. Since 2007, it has accumulated losses of more than HUF 5bn (US$ 18.3m in today’s prices). Still, the newspaper is said to be among the most read dailies in Hungary.

Media experts in Hungary say that Nepszabadsag was targeted by the ruling Fidesz party for years. Mr Orban has been trying to acquire the newspaper as part of his efforts to build a media empire before the 2018 elections where he hopes to win a third mandate as prime minister. As such, Mr Orban’s friend Lorinc Meszaros has been reportedly eying Mediaworks.

The Democratic Coalition, the party run by Ferenc Gyurcsany, who was prime minister under the Socialists, said that a government crackdown is approaching. “The case is unprecedented, but not unexpected since the paper uncovered government corruption,” the party’s representatives said.
The real reasons why the newspaper (including its online version) was so abruptly shut down aren’t yet known. But as it stands, the closure of Nepszabadsag is yet another purge of critical voices in Hungary’s journalism.