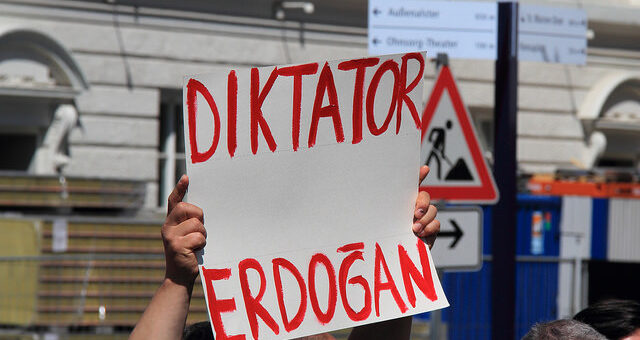 After a decade of manipulations that ensure a cozy relationship between the press and the president, Erdogan is now overseeing a harsh crackdown that is closing media outlets and putting journalists in prison.

Last August, the Turkish government shut down Ozgur Gundem, a Kurdish daily newspaper. Police raided the newspaper’s headquarters and arrested more than 20 journalists. The closure was ordered by an Istanbul court, which found the newspaper was a “mouthpiece” of the Kurdistan Workers’ Party (PKK), which is outlawed in the country.

The closure of Ozgur Gundem is only a small part of the Turkish government’s clampdown on media and journalism in the country, following the failed military coup in mid-July 2016.

In September 2016, 20 TV and radio stations were shuttered in Turkey, under the over-used and widely interpreted accusation of spreading terrorist propaganda. One of them specialized in children’s programming. The following month, another 15 media outlets were closed. Murat Sabuncu, the head editor of the newspaper Cumhuriyet was arrested on suspicion of helping a network linked with the Muslim preacher Fethullah Gulen. Turkish authorities have consistently blamed Mr Gulen, now based in America, for masterminding this summer’s failed coup.

The government argues that it is attacking media outlets that are found to be spreading propaganda from terrorist organizations, but freedom of expression activists reject this claim as a flagrant falsehood.

However, the real problem of Turkey’s media and the state of journalism there is much older. What is happening today, in fact, has been made possible by a power coterie that President Recep Tayyip Erdogan has actively built for some time now. A report launched today by Reporters Without Frontiers (RSF), an international press freedom NGO, shows how this ring of the powerful players have turned most of the country’s media into a vast propaganda machine, calibrated to protect their wealth and influence.

Without this sophisticated, ubiquitous power structure in place, Mr Erdogan couldn’t have done what he does today.

Turkey’s independent journalism and media are in their most dismal state in decades. All three indicators of political control measured in RSF’s report – control of media outlets and distribution platforms, funding and news agencies – show high risk. This is the worst case to date in the organization’s work on mapping media pluralism.

It might not come as a surprise that state-owned media outlets, such as Turkish Radio and Television (TRT) and Anadolu Agency endorse the government’s take on most topics. Authorities have always interfered with their coverage. But it’s seriously alarming to see that happening in most of the media.

Of the ten most read dailies, seven belong to owners who are affiliated with the government. The same is happening in the television market, according to RSF. There is still some space for independent journalism on the internet, but even there the situation is deteriorating quickly. Five of the ten most read news portals belong to people linked with the government, according to RSF.

But the government affiliation with media outlets is not the sole problem.

Some of the powerful media owners, including Turkuvaz/Zirve/Kalyon and Ihlas groups operate in a spate of lucrative sectors including construction, mining and tourism. In the past, such players have won hefty construction orders from the state.

The Demiroren family, publisher of influential Milliyet newspaper, has gained the reputation of being an obsequious supporter of the president. When Mr Erdogan, in 2014, keelhauled Erdogan Demiroren, head of the holding that publishes Milliyet, for a critical story that appeared in his newspaper, Mr Demiroren allegedly started weeping, according to a record of a phone conversation between the two men that is noted by RSF. Mr Erdogan at the time was Turkey’s prime minister.

All these people do business together, do favors for one another, and meet for libations and celebrations. Back in 2002, Mr Erdogan was the wedding witness for the daughter of Nuri Albayrak, one of the six Albayrak brothers who control the Yeni Safak newspaper and two TV channels, among other assets. Turgay Ciner, owner of a group that runs the Show TV channel, named a stadium after president Erdogan. The head of TRT, Senol Goka, advised Mr Erdogan before being appointed to the TV station in October 2014.

The post-July clampdown on media and journalism in Turkey has had a powerful chilling effect on the nation’s critical journalists. Nearly 100 journalists have been arrested to date, according to data from P24, a local independent NGO monitoring the situation. The industry lost thousands of jobs. Swathes of reporters were stripped of passports in a move to bar them from traveling abroad.

The attacks are part of a massive purge run by authorities in many sectors and layers of society. Some 2,000 academics and teachers have been fired through emergency decrees. All these attacks are allowed in the state of emergency announced on 20 July 2016 and extended until January next year. More than 37,000 Turks have been formally arrested, according to data from Anadolu.

Independent journalism is in a desperate situation in Turkey. The country is probably now the largest journalists jail in the world. Turkey was ranked 151st out of 180 countries in RSF’s 2016 World Press Freedom Index, and it is likely to slip further in next year survey.

The government’s furious attack on critical media in the past few months is to blame for the current crisis. But a longer-term series of machinations in the past decade are the more profound reason for the state of Turkish media today.