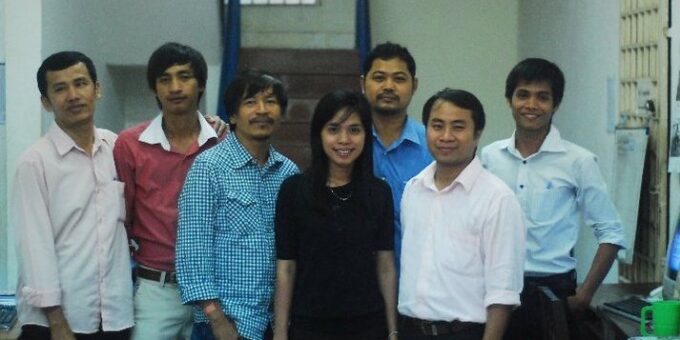 Bopha Phorn is a stringer for the Voice of America (VoA) Khmer language service and a part-time lecturer in media and communication at Pannasastra University in Phnom Penh, Cambodia’s capital city. Ms Phorn received the Courage In Journalism Award from the International Women’s Media Foundation (IWMF) for her report on rampant illegal logging in her country. Whilst investigating the story, she was shot at by the military police.

Before becoming a freelancer, Ms Phorn was an editor-at-large for the Cambodia Daily. She began her career at the German news agency Deutsche Presse Agentur (DPA) back in 2006. In her investigative work, Ms Phorn covers economics, politics, corruption, crime, security, and environmental and social issues.She is most proud of an investigation into a pedophile who had abused many children and had tried to stay in Cambodia after serving a jail term. Ms Phorn’s colleagues in the newsroom believed that the man had left the country. The local interior ministry reassured everybody that he left. “I followed my intuition, [feeling that] that the guy was still in Cambodia,” Ms Phorn said. “I was right.” Following a report on this issue that Ms Phorn worked on with one of her colleagues, the pedophile was deported.

Bopha Phorn: I became interested in investigative reporting as a natural extension of the same curiosity that drove me to become a reporter in the first place. Cambodia is a country with almost zero accountability, where those with power have little or no reason to explain their decisions, discuss their agendas or reveal their vested interests.Discovering the truth behind how, and for whom, our country is run, almost always requires methodical and resourceful reporting.

Information does not come easy from those who have no reason to expose it, so my drive to dig deeper into stories and structure my reporting around investigations rather than just reporting the political theatre on the surface came from a desire to learn what I and every other Cambodian have the right to know.As there are not that many female investigative journalists in Cambodia, I hope that being an investigative journalist will help set an example for other Cambodian women to become one.In short, I love chasing, uncovering, and revealing hidden information. I love pushing the boundary and provoking other people to do the things that we have never done before.

Bopha Phorn: The media as a whole is in a rough patch.

First of all, traditional business models have ceased to work and this has left outlets vulnerable to financial pressures and conflicts of interest that, in years gone by, were much easier to avoid. It’s hard to say any of this is an ignored problem, but I think that for many outlets, this vulnerability has meant the priorities that informed their work and institution have become less clear. Each outlet, whether it be a newspaper, TV station, magazine or online platform, needs to uncover, debate and define its mission.I think the arrival of Donald Trump in the White House and developments that have eroded transparency and accountability have prompted many publications to define and stand up for core values, wielding facts and journalistic tradecraft to combat not just lies and abuses of power, but to fight the doubts that readers have about our commitments to what we do.Moreover, most journalists are interested in [covering] political circus and most editors do not really buy stories on issues concerning education, women and children.

The internet has brought us an unbelievable number of ways to find out facts; yet, the internet has also led many outlets to compete on how fast they release stories rather than on the quality of the stories. [I believe] we should never trade the quality of our reporting with the speed the internet forces us into.In general, people depend on media to give them information.

Trying to attract [big] audiences, many journalists and media have lowered the quality of their standards, which is a major concern.

Bopha Phorn: In spite of the concern about media content, we have seen some improvement in the field.First of all, these days journalists are more cooperative and inclined to help each other and share contacts, which is [a] very different [situation] compared with the past.

This is an opportunity to share experiences, skills and contacts, and to discuss further cooperation on cross-border issues.Second of all, the internet has provided a great resource for journalists to look for people, documents, and other important clues to cover the responsible parties.

Bopha Phorn: [I would ask myself] how I could convince more people to believe and invest in investigative journalism. [I would argue] that an investigative story written in a certain way can move people and tap not only into the power of fact and information, but also use journalists’ power to tell the stories that instantly connect people who may have never met or had any prior connection to the subject.