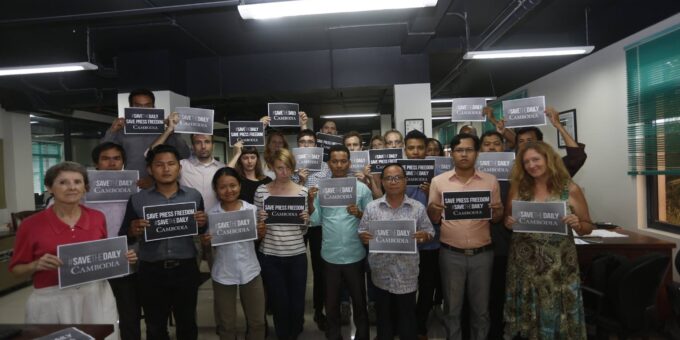 Cambodia Daily is shutting down operations after nearly a quarter-century in business. An outright dictatorship is on the horizon.

The journalists of Cambodia Daily newspaper delivered their last piece of investigative journalism on 4 September 2017. The last edition of the newspaper went out with a bang featuring a story under the headline “Descent Into Outright Dictatorship.”

A front page story covered the arrest of Kim Sokha, the Cambodian opposition party leader. Mr Sokha was arrested at his house in the early hours of Sunday, 3 September 2017 under accusations of “treason”, namely his closeness to America.

The Unbearable Heaviness of Truth

Cambodia Daily folded after 24 years of intrepid journalism, including a sheaf of investigative reports. The closure came after the government in early August served the newspaper’s publisher with a bill worth US$ 6.3m in back taxes. The publisher was ordered to pay its debt by 4 September 2017, or face closure. The newspaper’s representatives said that even if they owed unpaid tax money, the sum would come nowhere nearer the six-million figure.

The move is part of a bigger strategy of the Cambodian Prime Minister, Hun Sen, to rid the independent press in the country in preparation for general elections next year. Mr Hun Sen, a former commander of the Khmer Rouge, has been in power for 30 years and he shows no intention of giving up. Last February, Mr Hun Sen said that he shared the opinion that American President Donald Trump has about the media: “anarchic” troublemakers. He called the Cambodia Daily publishers “thieves”, according to reports from the BBC.

The Khmer Rouge was the name under which the Communist Party of Kampuchea was known in Cambodia following its establishment back in 1968 as a branch of the Vietnam People’s Army. They beat the Cambodia army hollow in a civil war and installed their own government led by Pol Pot, the infamous bloodthirsty dictator.

Along with Cambodia Daily, two other news outlets, both U.S. Congress-funded, Radio Free Asia and Voice of America, were also accused by the Cambodian head honchos of failing to comply with tax regulations. The wrath of the Cambodian Prime Minister also targeted the National Democratic Institute, a U.S.-funded NGO, that has been operating in the country for 25 years. The organization was ordered to “pack up and leave” within a week.

Publishing under the motto “All the News Without Fear or Favor”, Cambodia Daily was recognized as an independent voice, a paragon of objective reporting and a glimmer of hope for freedom of expression in a country and region that struggle with human rights abuses and corruption.
Many young Cambodian as well as foreign journalists started their career at the newspaper. Some worked their way up to top international media outlets such as Associated Press (AP) newswire or the New York Times. Cambodia Daily was set up by Bernard Krisher, a former Newsweek correspondent in Japan.

The paper’s closure is a hard blow to independent journalism and freedom of expression in Cambodia. They were one of the few players objectively reporting on corruption, environment and human rights abuses.

The Cambodia Daily predicament is part of a growing tendency among southeast Asian governments to muzzle critics. Last July, the Philippine Daily Inquirer, a critical journal in the Philippines, was sold to tycoons close to the controversial Duterte administration. Malaysiakini, a vocal news outfit in Malaysia, has come under relentless attacks over the course of the past year from the corrupt regime of the prime minister Najib Razak. In the young Myanmar democracy, journalists are disappointed by the slow pace of media form under the regime of Aung San Suu Kyi.

“Hopefully, those with courage will find a new way to report on the many challenges the country faces.” Journalists in the country can only hope Ms DeJonge is right.