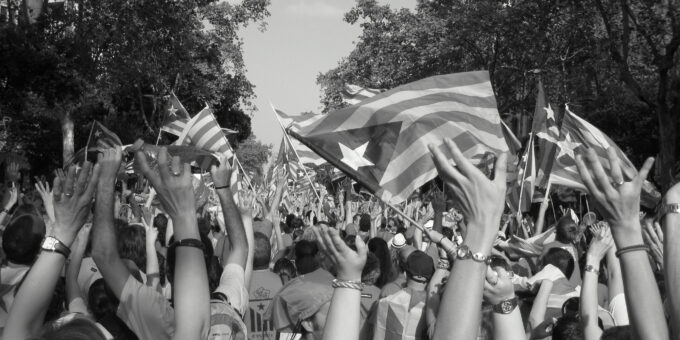 Madrid failed to show sympathy for, or pay enough attention to, Catalunya. That cost them dearly.

Red and yellow striped flags, emblazoned with the blue star of independence, hang from one in every ten balconies, and are draped on the backs of passersby in the streets. The slogan “Si democracia” is stamped on buildings, street signs and even spray painted onto the roads.

Thousands upon thousands of campaign posters urging people to vote have been plastered to all public buildings, only to be torn down by the police and re-pasted up the next day. It is the night before 1 October 2017, and the whole city is waiting with bated breath for what comes next.

On the one hand, it’s natural to feel unsure of what’s going on, be worried about the political and real-life implications of the vote and how it will impact your position here. Everywhere you look, you are reminded of what is happening, and that nobody knows what will come out of it. On the other, everywhere you are made acutely aware that this is an event organized by a separatist government, promoting Catalan pride, and you feel as if you can’t, or shouldn’t get involved in a dispute you can’t fully comprehend, because you are not Catalan.

I have spent the last few weeks in a state of budding unease. The situation has become very difficult to resolve for a number of reasons.

The first of these is that, obviously, the Spanish government deems the referendum illegal, and this is where many of the political issues have sprung from. According to the Spanish constitution, the document that has taken Spain from the Franco era into becoming an advanced modern democracy, which was signed by Catalonian members of Parliament in 1978, the country is ‘indivisible’; on the basis that the referendum today was not ratified by the central government, Spain’s Constitutional Court has outlawed it. This is entirely by the book, and this is why the police force have been drafted in to intervene. In fact, the president of the Catalonia government, Carles Puigdemont continued to misuse use public funds to organize the referendum after he had been told to cease all activity, so on a purely legal basis, this entire thing can be placed squarely at the feet of the Generalitat, as the Catalan government is known, and its secessionist leaders.

However, this first problem has branched into a number of other issues. As the Spanish government deemed the vote illegal, it has made no effort to garner sympathy for its cause, which compared to the widespread and convincing propaganda employed by the Generalitat, has not done them any favors. In addition, because the Catalan government has skipped over the fact that they are going against the constitution and have focused instead on ‘Madrid will not let you have a voice’, many more people have been turned away from the Spanish government of Mariano Rajoy purely on the basis that they believe they are being denied their right to free speech. Both of these issues have done nothing but add fuel to the separatist cause, and turn more hateful eyes to Madrid.

The final issue that has arisen from the unlawfulness of the vote is that, on polling day, many Catalonians have stayed at home, unwilling to risk the streets, the police and the civil disturbances, choosing instead to play it safe and wait it all out. These people are, in almost all cases, the ones who support Madrid’s rule, but they have been prevented from coming out to say so by Madrid’s own orders, and therefore any result that does come from this vote will almost certainly be massively in favor of Puigdemont’s government; he will then try to lever this to his advantage, ignoring the many voices who haven’t spoken out.

Mr Rajoy is caught between a rock and a hard place; he cannot ratify any Catalonian referendum without the agreement of the rest of Spain, which is very unlikely to happen. However, the more he simply rules that it’s unconstitutional, the more angry voices call for the vote. Puidgemont’s government has done a fantastic job at stirring the pot out here in Catalunya, turning what is, at its heart, an attempt at gaining more political power into a romantic bid for freedom in the eyes of his people.

What is even worse for Mr Rajoy, though, is that a poll taken last July showed that the majority of Catalans do not want independence. It is a vocal minority driving this political minefield, but because of Madrid’s botched responses and heavy-handed tactics which are primarily to appease the rest of Spain (as Mr Rajoy himself barely gets any votes from Catalonia anyway) the situation has now devolved. People crying out for the chance to vote —to exercise their democratic right— have been twisted by the Catalan government into people crying for independence, and the foreign media has jumped all over it like bees on honey; when in fact, many people just want the chance to vote and to say ‘No’.

There is now no clear solution to this problem.

Polling day has come and gone, and while the votes have yet to be counted, any result that comes from this cannot be truly considered a democratic process. Polling stations were shut down and interfered with by police, ballots seized, the internet shut off in many institutions, the universal census taken offline so anyone could vote any number of times they liked; the entire thing is a total sham of an event which will never, in any way, reflect the will of the Catalan people.

However, without Mr Rajoy giving them another chance to do it properly, if the result is in his favor, Mr Puigdemont will almost certainly attempt to jump on the back of this to further his cause and even go so far as to declare unilateral independence in complete defiance of the law of the land. This will result in even more political mess, more crackdowns, more uncertainty for the people living here and many more problems for the euro, Spain as a whole and even the futures of people trying to make their living in Catalonia; ordinary citizens who obeyed the law and didn’t go out to vote, the silent majority who have had their voices stolen from them, first by Mr Rajoy and then by Mr Puigdemont.

The Catalan government has realized this and begun an attempt in earnest to turn international bodies to their side, releasing pictures of those injured in police charges whilst simultaneously urging its citizens to stand in the way of the officers and do all they can to protect the ballots. It has changed from an earnest bid for some sort of democratic vote into a media battle, and this will only stir up more problems for the central government.

As a foreigner in Catalonia and a believer in a whole and complete Spain, the next few weeks are going to be a very tough wait.