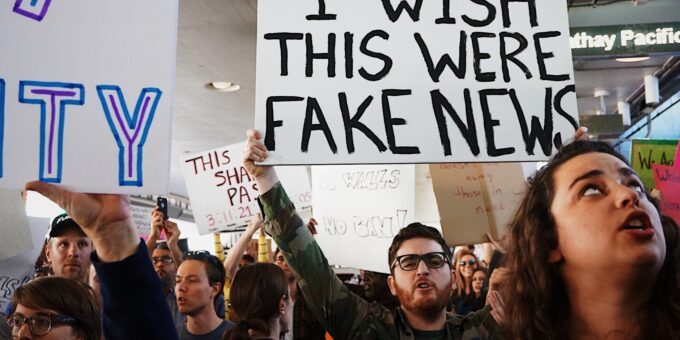 As fake stories are flooding the Bulgarian internet, local journalists are responding by debunking lies and tracing the sources of misinformation. They are bracing up for a tough battle.

Bulgarian news aggregator Edinnabulgaria.site reported last August that dogs helping the Bulgarian border police would be euthanized. They cited a fringe Bulgarian website as the source of the information: a link took readers to an article published there in December 2015.

Nova Television, one of the two largest TV stations by audience in the country, which in August this year launched its own fake news-debunking platform, checked the veracity of the story. The border police informed the TV station that some dogs were let go when they reached a certain age and could no longer do their job. Yet, they were not put to sleep, as the fringe website wrote, but adopted by border policemen.

The story was thus inaccurate and misleading. More importantly, it turned out that it was, in fact, 13 years old. It first appeared in 2004 and has since resurfaced online several times.

The dog story is not a singular example of misinformation in Bulgaria. The scope of the fake news phenomenon in  the country is much bigger, according to Georgi Auad, director of the Bulgarian media analysis company Perceptica. He presented a few such cases at an international conference on 9 November 2017 in Sofia, co-organized by the Association of European Journalists-Bulgaria (AEJ-Bulgaria) and the Friedrich Naumann Foundation, a German foundation that promotes liberal politics.

As a relatively young EU member state trapped between the west and Russia, Bulgaria has been a fertile ground for the dissemination of inaccurate information presented as true and new. The story about the Bulgarian police dogs is exceptional in terms of longevity, but examples of fake news abound on the Bulgarian internet. Debunking them is a laborious job. Traceability is key to doing that effectively, according to Jacques Pezet, a Berlin-based French journalist working for the daily Liberation and Correctiv.org, a German fact-checking website.

Topwar.ru, a Russian portal that is often cited in Bulgaria by yellow media, but sometimes by some serious online media as well, reported on 3 August 2017, that the Bulgarian soldiers refused to shoot targets in the colors of the Russian flag during a military exercise conducted by the North Atlantic Treaty Organization (NATO). On the same day, the report appeared on a Bulgarian news website with small readership. Then, it was taken over by other Bulgarian outlets of dubious reputation and ended up on foreign websites, including the English version of News Front, a Crimea-based website, Global Research Canada, an independent research organization, and the Czech news site Ac24.cz. Eventually, the original source got lost.

In late August, the EU vs Disinformation, a platform run by the EU’s diplomatic service, identified the story as fake news, pointing to Ac24.cz as the original source. That, however, didn’t end the story’s journey around the globe. Russian language outlet EurAsia Daily republished it in mid-September, spawning during the following week more than 40 stories in Russian media, including the website of the Russian broadsheet Pravda.
According to the Bulgarian authorities, the country provided logistical support in the military exercise, but Bulgarian soldiers did not participate in any shooting sessions.

The EU, for its part, has not managed to go unscathed in the information warfare taking place on the Bulgarian soil.

In February 2017, various websites reported that Johannes Hahn, European Commissioner for European neighborhood policy and enlargement negotiations, had secretly suggested that Bulgaria would disappear as a nation in 40 years and that the EU should claim its territory. The story was, in fact, first published in April 2013 by a satirical, Onion-style Bulgarian portal whose authors clearly indicate on their website that everything they publish is a product of their imagination.

The dangers posed by the spread of false stories prompted major media organizations in Bulgaria such as Nova Television and the news website Dnevnik.bg to address the problem through specially designed campaigns. Unlike their peers in the west, though, where journalists have joined forces across borders in the fight against fake news, setting up influential fact-checking organizations like Correctiv.org and First Draft News (an initiative of the Harvard Kennedy School in the United States), Bulgarian media act individually — if they do it at all.

Some Bulgarian journalists are skeptical that such cooperation would work in their country. Others admit that they had not even discussed such a possibility for reasons difficult to gauge. Fake news can badly damage trust in news media, as seen elsewhere. Until Bulgarian journalists  realize that, addressing fake news effectively may already be a lost battle.

Daniel Penev is a freelance journalist and a member of the Association of European Journalists-Bulgaria (AEJ-Bulgaria).