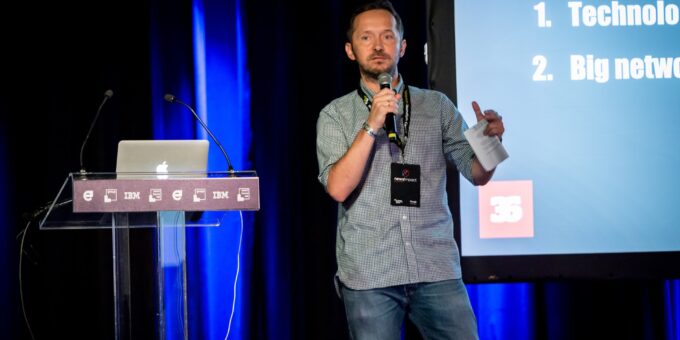 Andras Petho spent much of his 15-year journalism career at the Hungarian news site Origo, which he left under political pressures. With other former colleagues from Origo, two years ago he co-founded the investigative journalism outlet Direkt36, a non-profit organization.

Mr Petho’s career included 15 months with the BBC World Service as a producer. In 2013, he spent 8 months with the investigative unit of The Washington Post as a reporter on two major data-driven projects and contributor to other investigations. He has twice received the Soma Award, the prestigious annual award dedicated to investigative journalism in Hungary.

As a member of the International Consortium of Investigative Journalists (ICIJ), Mr Petho was involved in two of the biggest journalism collaborations ever, which produced the Panama Papers and the Paradise Papers stories. He is very proud of both. “I learned so much from working with ICIJ and I got to know so many great people,” he says.

His experience at the Post with his friend and mentor, David Fallis, has also been transforming. “As a journalist from Hungary, I never dreamt of writing even a small piece for a major American newspaper,” he says. Therefore, he couldn’t believe his eyes when he saw his byline on a lead story in the Post’s Sunday edition. Today, Mr Petho is working on a string of investigations into how the companies controlled by the family of the Hungarian Prime Minister Viktor Orban benefit from public funding. Reporting on this topic, done jointly with Blanka Zoldi, is not over yet.

Q: How did you become interested in investigative journalism?Andras Petho: It sounds like a cliché but it started with a movie. I was studying communications at the University of Szeged, a city in southern Hungary, and I was hesitating over whether I should go into Public Relations (PR) or journalism. At the beginning, PR was more appealing, partly because I thought that it would offer a more stable career but also because I didn’t believe I was smart or talented enough to be a journalist covering such serious topics as politics or business.

For a while, I was doing both PR and journalism (not very wise ethically, I know now, though I didn’t have any actual conflict of interest). I worked as an intern at a local PR agency during the day and did interviews at a small radio station for an evening program. I did not make any money at the radio so when I was offered a job at an IT firm to work as a copywriter I was really tempted to take it.

Then I went to see The Insider, a movie that told the story of an investigative journalist (played by Al Pacino) who took on some powerful people in order to expose some serious wrongdoing. As I was sitting there in the movie theater, I decided that I would rather do what that guy was doing instead of writing promotion articles about IT services. Of course, it took me a long time (and a lot of studying and practicing) to become an actual investigative reporter, but watching that movie was definitely an inspiring moment pushing me in that direction.

Andras Petho: I have always admired the U.S. news media, especially newspapers, and learned a lot from simply reading them. It was a shock, therefore, how many of them so misjudged the situation in their own country during the 2016 presidential campaign. With all the fancy data models and tons of reporters on the ground, the dominant narrative was that Hillary Clinton would win.

Of course, now we know that she didn’t and there has been a lot of Monday morning quarterbacking going on in the media circles since then, with more and more journalists saying that they actually saw signs of Trump’s upcoming victory. Still, I would like to see more analysis on what went wrong because I think the whole industry could learn from it. My theory (and it is just a theory) is that as with almost all big mistakes in journalism, this Trump error was at least partly the result of the so-called confirmation or narrative bias. This happens when journalists tend to ignore information that does not fit in their story or simply when they follow the conventional wisdom in their reporting and fail to question generally accepted assumptions.

Good journalists are able to resist this to some extent but this is something extremely difficult to do because believing in things we would like to believe in is somehow part of the human nature. I think, however, that we would do a better job as journalists if we understood more how these biases work. Maybe it’s time to add some psychology or brain science courses to the journalism schools’ curriculum.

Andras Petho: As a member of the International Consortium of Investigative Journalists (ICIJ), I was fortunate enough to be part of the biggest international investigative collaborations, which broke the [series of] stories known as the Panama Papers and the Paradise Papers. It was extremely exciting and inspiring to see the power of collaborative journalism so close. No single news organization could have achieved the kind of impact that we achieved together.

What made this possible is ICIJ’s model, which is based on what they call radical sharing (of information among journalists who are involved in the projects), their experience in managing such big teams, and their smart use of technology. The latter one is crucial; without the right technical solutions we wouldn’t be able to process a huge pile of documents (like the Panama or Paradise Papers) and it would be really hard to communicate securely.
Fortunately, ICIJ is not alone. The Organized Crime and Corruption Reporting Project (OCCRP) is another powerful investigative journalism network, and Direkt36 is a proud member of it.

Andras Petho: I work in a difficult environment, where independent journalists have come under increasingly strong pressure. A few years ago, I left my previous job when I was pushed to drop a politically sensitive investigation. But I know that you can face much more difficult choices as a journalist, especially if things get even worse here in Hungary.

So, the question I sometimes ask myself is how far am I willing to go and how big are the sacrifices I am ready to make to keep doing what I do; and I don’t really know the answer.