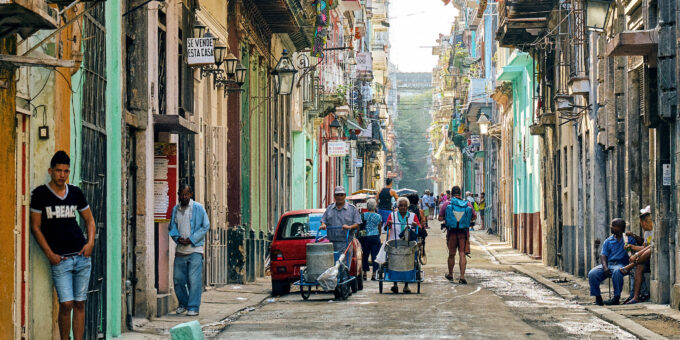 Cuba’s Constitution prohibits private media. Nevertheless, more than a dozen media outlets outside state control have unfolded in the country since the beginning of the century.

A total of fourteen media outlets that were launched in Cuba from 2001 to 2017 have had an impact both inside and outside the country. They have won international awards and recognition for the quality of their content.

In 2017, El Estornudo’s Jorge Carrasco became the first Cuban journalist to receive the Gabriel Garcia Marquez Journalism Award, and the Postdata team was a finalist in the Data Journalism Awards. These are two of the most prestigious journalistic awards in the world.

These publications have caused such a stir that at a meeting with officials of the Cuban Communist Party in early 2017, a party bigwig said: “The OnCuba digital platform is very aggressive towards the Revolution and we are going to shut it down. If they want to make a scene, so be it. Let them say we are censors.”

The non-state media organizations have one thing in common: their primary goal is journalism.

Most of their teams have fewer than a dozen journalists, many of them working as volunteers. All these media sites have reporters working from Cuba’s capital city of Havana. Half of them also have offices or newsrooms in foreign cities, such as Miami, Mexico City and Valencia, Spain.

While some have solid business models, others haven’t even started thinking about how to generate revenue. Their audiences are scattered over the internet, and include Cubans living on the island (with infrequent access to the internet, and almost exclusively in public spaces), Cubans living in the diaspora and foreigners who want to learn about Cuba.

These media organizations innovate without realizing they are being innovative: they develop applications to download content offline, raise funds in a kind of “Creole” crowdfunding system that flouts national laws and the United States’ embargo, produce podcasts and create partnerships.
Almost all of them survive in an openly illegal space known today locally as “allegality.”

Some 70% of non-state media in Cuba, or ten out of fourteen of them, were created between 2014 and 2016. All of them focus on national issues and only 35% of them cover stories from the Cuban provinces. A fifth of them cover local news. The most covered topics by these media are social issues (some 85% of the outlets cover those), followed by culture (57%), politics (50%), sports (42%) and the economy (35%). Some of these media specialize in specific niches such as the environment (Periodismo de Barrio), technology (Cachivache Media), entrepreneurship (El Toque), business (Negolution) and sports (PlayOff).

Of Youth and Women

Who creates Cuba’s emerging media? The answer is young people and women, usually in teams. Some 30% of Cuba’s independent media organizations were founded by one person while the other 70% were launched by teams of two to eight journalists. The latter was the case with 14ymedio, El Estornudo, PlayOff, Cachivache Media and Postdata, among others. Following a regional trend, more than 40% of the founders of Cuban private media are women.

Nearly two-thirds of the founders are journalism and social communication graduates. Five of them have graduate studies. Most of the executive and editorial management positions are held by men; all of managers are journalists, except in CiberCuba, PlayOff and La Joven Cuba.

The audiences of the digital publications in Cuba vary significantly. There are media sites with fewer than four thousand unique users per month, and others that have more than four million. These numbers describe website traffic, but do not reflect the total number of readers. Due to limited internet access on the island, traffic is often generated through other means, including emails, .pdf magazines published offline, or in the so-called Paquete de la Semana (a weekly package of digital news and entertainment that is distributed via USB drives throughout Cuba).

Although their content is targeting Cubans living on the island, only 41% of these media succeed in making Cubans in Cuba their main source of traffic. In the case of half of these outlets, the majority of readers come from the United States, specifically the Cuban diaspora residing in Miami. The second largest country of origin for users moves between Venezuela, Uruguay and Spain. The third biggest readership group comes from Chile, Ecuador and Mexico.

Traffic from mobile devices continues to rise among non-state media in Cuba. CiberCuba, which is blocked in the island, reaches 70% to 79% of its audience via mobile devices, and through Facebook Instant Articles, which made its content more accessible to users of the social network living in the country.

According to local observers, Facebook is the most-used social network among privately founded media organizations. All of them use Facebook, followed by Twitter (92%), YouTube (78%) and Instagram (57%). None of them use apps that require a faster internet connection such as Snapchat, Telegram or WhatsApp.

Three of these media organizations have mobile apps. CiberCuba has more impressive mobile statistics, with approximately 100,000 downloads and 30,000 regular users per month. Because their website is blocked, the app is the main access point for local users.

Almost all of the emerging Cuban media have been the target of threats and other forms of harassment. Some journalists based in Cuba have been interrogated by the Department of State Security, and others have been harassed on social media by people behind fake or anonymous profiles and pages.

At the end of December 2014, 14ymedio reported on its site that several members of its team had been arrested. One of its co-founders, Reinaldo Escobar, was arrested when he left the building, handcuffed and taken to a patrol car waiting nearby. 14ymedio reporter Victor Ariel Gonzalez was also arrested. The day before these events, the editor of the publication, Yoani Sanchez, was placed under house arrest.

Ineffective rule of law hinders the exercise of journalism in Cuba. On 11 October 2016, six members of Periodismo de Barrio (including the author of this article and two of our contributors) were arrested in the municipality of Baracoa, Guantanamo. As we reported on our website, the reason for the arrests was that in Baracoa, Maisi and Imias, reporting could not be carried out because those areas were allegedly under a state of emergency. We were interrogated and our equipment was seized. A later investigation revealed that no such state of emergency had been declared; however, all journalists were forced to leave the area.

In the last months of 2017, Harold Cardenas, one of the editors of La Joven Cuba, has been subjected to intense online campaigns to discredit him, mostly by anonymous users. In addition, several journalists who contribute to both private and state media have been dismissed or punished.
In spite of all these technical and operational challenges, though, Cuban journalists behind new media on the island believe that there is still room to push the limit. Prestigious prizes and their readers are keeping them alive.

This is a story adapted from a post originally published on SembraMedia’s blog published with permission. It is based on the author’s own research of Cuban privately run media. (adapted by Norina Solomon, edited by Theodore Southgate).