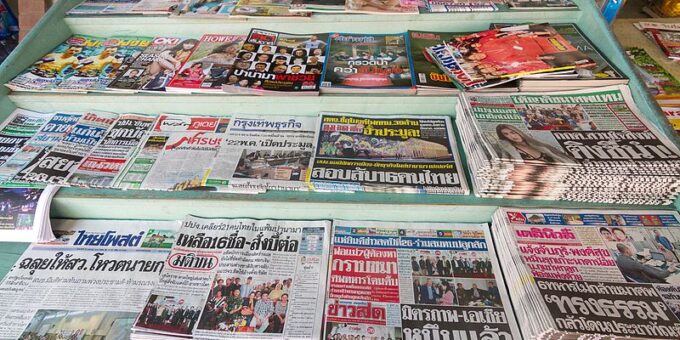 A business group with far-right affinities buys The Nation, one of Thailand’s most respectable newspapers. This means that independent reporting is now likely to be whittled away.

Pravit Rojanaphruk has spent more than two decades toiling for the English-language newspaper The Nation in Thailand – until 2015, when the Thai military, following a successful coup d’état a year earlier, forced him out of his job at the newspaper where he was writing a political column. Earlier in his career, Mr Rojanaphruk commended The Nation for being “a bastion of committed journalism and tolerance.”

A newspaper catering to the affluent, English-speaking upper class in Thailand, The Nation has been known for its sharp-sighted coverage spanning its nearly 50-year history. However, during the past five years, it has increasingly veered to the far right, particularly in its opinion pages that, among other things, brazenly praised the 2014 military coup.
The sale of The Nation in mid-January 2018 not only brings the publication much closer to the far right, but also marks the end of its independence, local journalists in Thailand have told MediaPowerMonitor.

As of January 2018, the new owner of Nation Multimedia Group (NMG), The Nation’s publisher, is News Network Corporation Public Co. Ltd, a company that controls the conservative news outlets T News and INN News in Thailand.

NMG also owns two digital TV stations and two Thai-language newspapers. They were also part of the purchase. Sontiyan Chuenruetainaidhama, who was until January 2018 the director of News Network Corporation Public Co. Ltd, has tried to buy NMG for three years, but The Nation’s editorial team has bitterly opposed the deal. Mr Chuenruetainaidhama, who was appointed chairman of NMG board today, is said to have acted on orders from Chai Bunnag, a Thai businessman who has eyed The Nation for years.

T News and INN News are known for their unconscionable support for the royal house and the army. Journalists in Thailand also say that these outlets are known for constantly stealing content from other news organizations.

The Nation’s new owners haven’t commented on whether they will change the editorial policy at the newspaper. The journalists interviewed for this article, though, say that the new owner will definitely turn The Nation into a far-right newsletter.

Mr Chuenruetainaidhama said that the new owners purchased The Nation to save the publication from bankruptcy, a claim that journalists in Thailand, including some who worked with The Nation, are scoffing at. It is true that The Nation has been confronted with a series of deep financial crises, but this situation can’t be solved simply by pouring money into the newspaper. Vision is needed as well.

NMG saw its shares on the Stock Exchange of Thailand (SET) tumble in the past seven years or so. In January 2018, they reached their lowest level since 2011. The company has been faced with dwindling sales revenues for years. This has prompted the publication’s management to trim staff and operations several times.

The Matichon Group of newspapers, which also publishes the Khaosod English news portal, finished in the red in 2016, according to data filed with the SET. Another stock exchange listed publisher, Post Publishing Co., which runs Bangkok Post, The Nation’s rival in the English language newspaper market in Thailand, made a meager profit in 2016, but a loss of THB 42.1m (US$  1.2m) was registered in the previous year.

The reaction of newspapers to the crisis has been a combination of freezing salaries, operational downsizing to reduce the cost of printing, and cuts on travel budgets for journalists. In some newspapers, journalists were even told to save on water and electricity. The crisis took its toll on some publications. The Thai-language newspaper Baan Muang shuttered in late 2016 after 44 years in business. A veteran Baan Muang columnist said that the deteriorating democracy in Thailand under the army’s rule following the 2014 coup was closely linked with the economic predicament. This has contributed to the demise of the print media industry, he wrote in Baan Muan before its closure.

A Business or a Basket Case?

Thai media observers explain that while the local newspaper market is out of sorts, digital publishing is providing an alternative means of survival. In 2016, online ad spend in Thailand increased by more than two-thirds.
Digital advertising, however, is not the silver bullet for the Thai newspaper industry. Ad revenue has to be supplemented by subscription money to keep a publication in business; and there are no signs Thais would be willing to pay for content online anytime soon. People aged 30 or younger hardly read any newspapers anymore, according to data from the University of the Thai Chamber of Commerce.

This has to do with the declining quality of journalistic content as well. Most journalists in the Thai media are forced to produce content for a plethora of platforms as Thai media competes for eyeballs by continuously increasing their output. In this quantity-driven fight, quality and distinctiveness are lost; and the result is no public interest in paying for journalism.

How The Nation will survive in this ailing, highly politicized market is hard to tell. If the newspaper’s new owners thinks that money can solve all of the publication’s woes, they are in for a fall, local experts say. “Audience is really important today,” a former journalist with The Nation told MediaPowerMonitor. If The Nation’s new owners are changing the publication’s reporting style and tone by injecting more ideology into content, they might actually lose even more readers, he added.
It is hard to see The Nation’s new owner not meddling with content. Ironically, in the race for readership, doing that might be exactly what would pip them to the post.