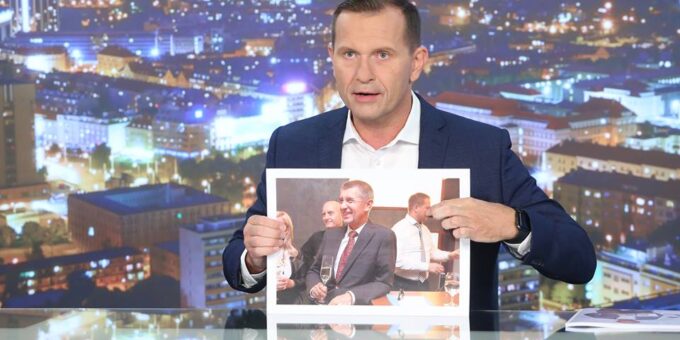 Jaromir Soukup, owner of TV Barrandov in the Czech Republic, is building a media empire with Russian and Chinese money.

“I am ashamed of him,” John Bok, a Czech political activist, said of Jaromir Soukup, in an interview last January with Aktualne.cz, a Czech news outlet.
Mr Bok, who has known Mr Soukup since the early 1990s when they were both members of the Transnational Radical Party – a political association of citizens fighting for human rights – says that Mr Soukup is unrecognizable today. His passion for human rights and justice from the early days of post-communist Czechoslovakia has died away. Instead, he has developed an odd attraction for populist miasma and dubious politicians.

Owner of TV Barrandov, one of the youngest television channels in the Czech market, Mr Soukup is tirelessly plumping for the Czech president Milos Zeman, a populist, leftist politician known for his incontinent attacks against immigrants; Politico called Zeman “the European Trump”. Every week, Mr Soukup interviews Mr Zeman in a program aired on TV Barrandov. Mr Soukup is also notorious for his diatribes against Czech TV, the country’s public television station, which is praised by local experts and journalists for its commitment to independent reporting and quality programming, a tough job in a media market marred by political pressures.
So who is Mr Soukup, and how much influence does he actually exert in Czech media and politics?

Mr Soukup, who will turn 50 next February, kept a relatively low profile in the 1990s when he slowly but steadily built his advertising and PR business. For a while, people knew him more for his pugilism career than for anything else: he owns a professional boxing club, Medea, and he himself has been boxing for decades.

A graduate from the Law Faculty at the Prague-based Charles University, Mr Soukup founded in 1991 the media house (also) Medea, a company that he used to operate a raft of PR agencies, business consultancies and market research companies serving clients in Slovakia and the Czech Republic. Medea went great guns. In 2008, the company had an annual turnover of over €88m, according to the last batch of financial data released by the company before the economic crisis. It had well-off clients such as the power provider CEZ and the pharmaceutical manufacturer Zentiva.

Mr Soukup’s real ascension, though, is closely linked with politics. In the 2000s, he beavered away at cementing his relations with politicians by either financing or serving them. “Without political friends, he couldn’t get where he is today; he couldn’t access the money he needed to run a TV station,” says a journalist from TV Barrandov,  who did not want to be named as this would jeopardize his job at the station. “Call me Berlusconi,” Mr Soukup himself told the Czech daily newspaper MF Dnes back in 2009.

Mr Soukup’s early dealings with politicos involved the Green Party, which he financed during the 2006 electoral campaign. That support rewarded him with the job of deputy minister in the education ministry of the second Mirek Topolanek government. Mr Topolanek was a member of the Civic Democratic Party (ODS) of the former Czech president Vaclav Klaus. Following a spat with the Greens, Mr Soukup then befriended the Public Affairs (Veci Verejne) party, a conservative liberal grouping established in 2010. Soukup supported Veci Verejne by selling them advertising at discounted prices and doing PR services for them on a pro bono basis.

“It is this constant shift from one party to another that makes people suspicious [of Soukup],” said a journalist from Lidove Noviny, a Czech daily newspaper, who followed Mr Soukup’s career. “Hardly anyone trusts him.”
What puzzles people today is his turning away from more moderate, liberal parties towards sleazy, controversial politicians.

Politics, like anything else, is for Mr Soukup only a means to further his influence. “He doesn’t care about political jobs or government jobs,” says a reporter working for MF Dnes in Prague. “He cares about political jobs to gain other things, especially money.” Mr Soukup supported the Greens in mid-2016 mostly because he wanted to win lucrative contracts from state-owned companies such as Lesy CZ, the company that manages the forests in the Czech Republic, according to Martin Bursik, a former chair of the Green Party.

There are many businessmen close to politicians in the Czech Republic, but Mr Soukup is a special case. He has managed to win favors and boost his business thanks mostly to his opportunism. Throughout his life he has been a hypocritical, unreliable person, journalists interviewed for this report say. As soon as he didn’t get what he wanted from his association with the Green Party in the 2000, Mr Soukup began to chivvy the party’s leader. Mr Bursik accused Mr Soukup at the time of taking revenge by instigating a police investigation into the accounts of Ecoconsulting, a company controlled by Mr Bursik.

Living for the Screens

In the past five years or so, Mr Soukup seems to have found a new vocation: television. Since 2012 when he took over TV Barrandov, Mr Soukup has devoted a big part of his life to the station. Today, he has at least seven shows aired on TV Barrandov. He is so omnipresent (if you switch on a TV in the Czech Republic you can hardly miss seeing his face in primetime) that some local journalists suggested renaming the station Soukup TV.

TV Barrandov is a generalist television station that airs a wide range of programming genres, including news and information, movies, political talk-shows and reality shows. With an audience share of some 6% in 2017, TV Barrandov remains a relatively small player. However, its audience has grown steadily in the past decade, nipping at the big TV channels’ heels. TV Barrandov is now the fourth largest channel by viewership in the Czech market after TV Nova, CT1 (the public TV’s first channel) and Prima TV, all stations with a history of more than 25 years.

TV Barrandov is not the sole media asset that Mr Soukup controls. His influence is growing thanks to an increasing number of media outlets that he owns through his company Empresa Media. These include the weeklies Sedmicka, Tyden and Instinkt.

This growing media portfolio should not be taken in stride, journalists say. Every day, Mr Soukup’s news media expands its base of followers.

Sedmicka, a tabloid, is the third most read weekly in the country: it has a circulation of over 112,000, according to data from the local press audit bureau. Tyden, a serious weekly, has a circulation of over 54,000, which is a decent figure in the Czech print media these days. In Tyden’s category, only two other weeklies, Reflex and Tema, command more readers in the Czech Republic.

What really troubles independent journalists in the Czech Republic, however, is the source of money that helps Mr Soukup increase his media house. He is a skillful and powerful businessman who made money on his own, people who have worked with him at Medea in the 1990s say – but to expand his media business, he is said to have received fat checks from abroad, thanks mainly to President Zeman.

Reports in the local media from 2015 indicate that the Chinese company CEFC had a stake in Empresa Media. In 2017, Mr Soukup said that CEFC returned the stake to him, but he would not elaborate on the nature of his cooperation with the Chinese. CEFC has been investing heavily in the Czech Republic since 2015. It has bought stakes in the financial group J&T Finance Group, the brewery Lobkowicz Group and the football club SK Slavia Praha. It also owns the five-star hotels Mandarin Oriental and Le Palais Art Hotel in Prague, the Czech capital city. President Zeman works for CEFC.

Pro-Russian propaganda regularly featured on TV Barrandov’s programs and Mr Soukup’s cozy relations with Mr Zeman (who has reportedly received money from people close to the Russian government) has also prompted speculations that Mr Soukup’s media outlets take Russian money as well, according to an upcoming report from the Center for Media, Data and Society (CMDS), a think tank in Budapest.

With high-level connections in the Czech government, a growing media business and financing from abroad, Mr Soukup is a redoubtable force in today’s Czech media. Chances that he would become what Berlusconi was in his glory days in Italy are still slim, but visibly inching up.