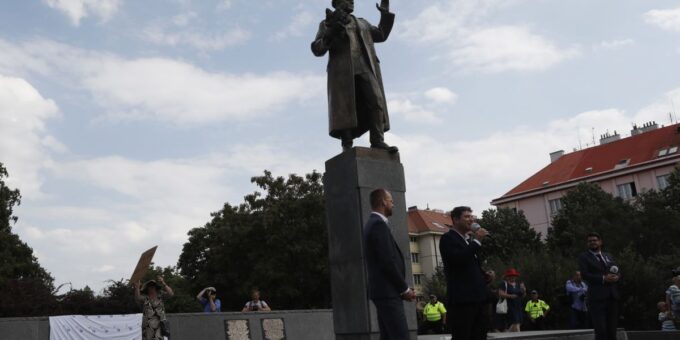 FBI found that Christopher Steele, a former British spy, one of the key informants in their investigation, was part of a complex “Russian disinformation campaign.”

Interior Minister of Ukraine Arsen Avakov has described as “abnormal and shameful” a search on the dwelling of MP Tetiana Chornovol by the State Bureau of Investigations (SBI) yesterday morning. The minister asked for the resignation of the First Deputy Head of the SBI, Oleksandr Babikov.

Inmates at the No 15 penal colony in Angarsk in Siberia “attacked a guard.” Others cut themselves with glass from broken surveillance cameras. Russian penal service said that the mutiny, which broke out on Thursday, was under control.

The investigating committee of Russia launched a criminal prosecution for the removal of a statue of a Soviet Marshal in Prague. The removal was approved by the Prague 6 town hall last week. The Russian Foreign Ministry called the removal “a crime” that would not remain unanswered. Russian officials accused Prague 6 authorities of breaching obligations arising from bilateral Russian-Czech agreements.

The internal conflicts among the Donbas militants have intensified in the past few days. Another Ukrainian soldier was killed following an attack by the invaders.

The U.S. Air Force intercepted, over the Bering Sea, Russian maritime reconnaissance airplanes that were flying to Alaska.

The Russian government completed the purchase of a majority stake in Sberbank from the country’s Central Bank, paying for it a total of US$ 28.5bn. The money for the transaction was taken from the government’s sovereign wealth fund.

In February 2020 the index of construction production, calculated on the base of seasonally adjusted data, was 0.6% below the level of the previous month.

Prime Minister Boyko Borissov said that Bulgaria will apply to join the Exchange Rate Mechanism (ERM-2), which ensures that exchange rate fluctuations between the euro and other EU currencies do not disrupt economic stability, by the end of April.

Latvia has taken a loan worth €500m from the Nordic Investment Bank (NIB), a move aimed to provide the government funds to survive the coronavirus crisis and maintain economic activity. The loan has to be returned within 10 years.

Poland’s foreign ministry said yesterday that it called on Moscow to immediately return the wreckage of a Polish presidential plane that crashed in western Russia 10 years ago.

The European Commission approved Polish government plan to use €115m to aid the country’s economy. The money, spent as direct grants, is meant to partially cover interest on business loans.

Dozens of rights groups signed an open letter that slams plans by Prime Minister Edi Rama to impose heavy jail sentences on anyone disobeying quarantine orders or breaking curfews during the ongoing pandemic.

A legal procedure could be initiated against the president Igor Dodon after he admitted that he asked the President of the Constitutional Court, Vladimr Turcan, for explanations regarding a decision to suspend the government’s responsibility concerning various new bills.

Opposition and civic society groups have condemned the detention of a Democratic Front activist for posting false news according to which President Milo Djukanovic was infected with Covid-19.

NGOs and media outlets in Montenegro called on Prime Minister Dusko Markovic to postpone planned public consultations for the adoption of a new freedom of information law.

Matilda Bogner, Head of UN Human Rights Monitoring Mission in Ukraine, expressed her concerned with the increase in civilian casualties in the conflict zone in eastern Ukraine.

The Budapest government will send tests for coronavirus, masks and protective equipment to Hungarians living outside the borders, in regions such as Transylvania, Vojvodina, Subcarpathian Ukraine, Slovakia, Slovenia and Croatia.

Government officials threatened the head of the Islamic Community with criminal charges if he reopens mosques, as he promised in a televised announcement. The Muslim leader asked the government to allocate more funding to his community if they want the Islamic population to obey the rules of the government during the ongoing crisis.

The emergency bill regarding the extension of the mandates of the local public administration authorities includes some worrisome measures for the organization of the local elections. According to the bill, political parties as well as independent candidates can run even if they do not have enough signatures from supporters, but pay a certain amount of money instead of showing a list of supporters that has been legally required until now.

Romania is the first EU country to ban exports of cereals (except to EU countries) as a measure to secure domestic supply during the coronavirus crisis. Egypt is the main importer of Romanian cereals.

Bucharest General Council approved yesterday a proposal of Mayor Gabriela Firea to restructure 13 of the 24 municipality-owned companies. According to the proposal, the 13 companies will be transformed through absorption into five companies. The mayor said that the activities of the merged companies duplicated to some extent. The opposition called for companies’ complete dissolution and did not vote on the projects.