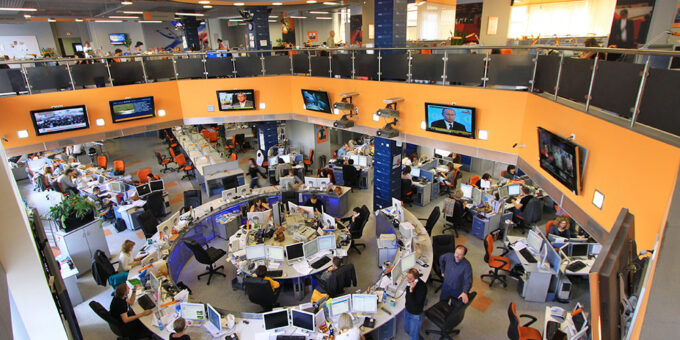 German authorities are struggling to stave off a wave of fraud attempts by fictitious companies, many of whom are based in Eastern Europe, to get government funding. They try to access finances from the generous support program for companies hit by the pandemic put in place by German authorities.

Google has blocked the YouTube account of the news agency RIA, a Kremlin-funded media outlet. Thus, tens of thousands of agency videos and projects have been deleted.

The decision made by the global e-commerce giant Amazon to temporarily shut down warehouses in France following a court order leads to pressures on MPs to find a solution to this dispute, which affects the deliveries to millions of people.

Tech applications that would normally be considered invasive are likely to be soon in use in the U.K. to help combat the coronavirus crisis. Such apps include a contact-tracing app handled by NHS, Britain’s national healthcare system.

The Ukrainian Health Ministry changed its mind about a supplier of protective equipment it has chosen. The state-owned company Medical Procurement of Ukraine was ordered by the ministry to buy 90,000 protective suits costing a total of UAH 22m (€740,000). The Kyiv-based textile manufacturer Textile Connect won the contract to supply these suits. Now the ministry appears to want to halt the order, arguing that the suits are not up to European standards. The ministry has contracted a distributor that will import 71,347 suits from China, for a total of UAH 35m (€1.2m).

As of April 19, the Ukrainian online public procurement system ProZorro is imposing new rules to further increase its efficiency and make the procurement market more open.

NATO has initiated preparations for new joint exercises with Ukraine in the Black Sea. The North-Atlantic alliance stressed the readiness of NATO member states to deepen their partnership with Ukraine.

Polish Health Minister Łukasz Szumowski considers that the only safe way to hold elections in the country in May would be by postal vote. Poland is scheduled to hold a presidential election in May. The ruling nationalist party Law and Justice (PiS) has advocated a postal vote.

The laws connected with the coronavirus epidemic passed in Hungary have not “so far” violated European Union (EU) regulations, according to European Commission Vice-President Vera Jourova.

The Hungarian low-cost airline WizzAir said it will take over the new planes they ordered before the coronavirus epidemic in spite of warnings from experts that the air passenger market will not start to grow again before 2022.

The Hungarian government has decided to ease restrictions on the use of intellectual property for instructional purposes to support online classes that now take place regularly as a result of the coronavirus outbreak, according to the Hungarian Intellectual Property Office.

New protective gear arrived on what Hungary calls its “China airbridge”. Wizz Air planes were hired to travel on the China-Hungary airbridge for about 50 times since the eruption of the pandemic.

The defense ministry last Friday announced that it was setting up military task forces at an additional 11 strategic companies in connection with the novel coronavirus epidemic. These forces are in place to oversee key food processing and pharmaceutical companies with a view to ensuring the continued stable supply of food and medicine in the country. Such forces have now been set up at 104 strategic firms in Hungary.

The United Nations found Hungary responsible for “grave and systematic” violations of the human rights of persons with disabilities in the country. These are the findings of a two-year international inquiry conducted by the U.N. Committee on the Rights of Persons with Disabilities (CRPD).

The Russian Embassy in the Czech Republic changed its location after the square where it operated was on renamed after Nemtsov, a murdered Russian politician.

Anonymous, an International hacktivist group, carried out attacks on the Prague airport and several hospitals in the Czech Republic.

Tenders were launched in Moldova to purchase 52 cars for the country’s Police force. The value of the contract value is estimated at MDL 20m (€1m). Weeks ago, the Moldovan authorities announced that they would not carry out non-priority procurement during the epidemic crisis.

A total of 53 tons of medical equipment from China arrived in Moldova at the board of a Russian military plane. Russia offered the transportation for free.

The finance ministry has prepared a new emergency decree whose aim is to regulate cryptocurrencies. The decree is yet to be approved.

The European Anti-Fraud Office (OLAF) found fraud in relation to €410,000 taken from European funds to finance an environment project, but diverted by a consortium of five small and mid-size companies from Spain, France, Ireland and Romania towards an investment in a hotel-casino in Cyprus.

The credit rating agency Fitch revised Romania’s rating perspective from stable to negative, as a result of the impact that the spread of Covid-19 virus is  going to have on public finances in the coming period.

A cyber attack last year could have disrupted the supply of water in Lithuania’s second-biggest city of Kaunas, according to the annual National Cyber Security Status Report.

Lithuanian President Gitanas Nauseda put on the public agenda again the idea of establishing a state bank considering the coronavirus crisis. The country’s Finance Ministry is not so keen on the idea.

Hong Kong police arrested 13 activists over last year’s rallies as part of a sweeping operating aimed to neutering democracy campaigners. Those targeted included the media tycoon Jimmy Lai, founder of the anti-establishment tabloid Apple Daily. He was arrested at his home.

Zoom, a video communication platform, was banned by Taiwanese government after it surfaced that some of the traffic hosted by the software was “mistakenly” routed through China.

The deputy public security minister in China, Sun Lijun, faces corruption probe for “serious violations of discipline and the law.”

Chinese army plans to use the 6G technology on the battlefield, according to an article hosted by a military publication in the country.