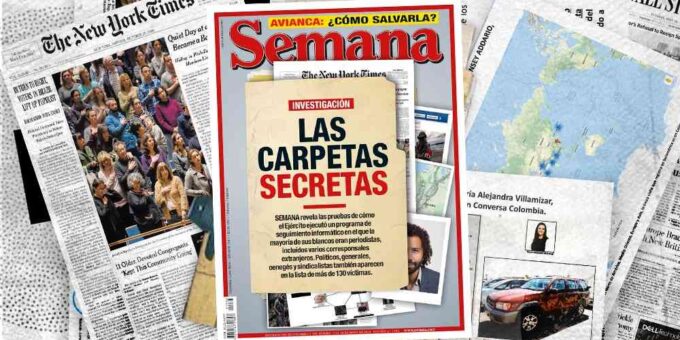 Allegations that the army conducts illegal intercepts and collects intelligence about journalists, judges and human rights lawyers are not new in Colombia; but when American taxpayer money is used to spy on many people, including American journalists, something is terribly wrong.

On 1 May 2020, Semana, a Colombian news magazine, reported that the nation’s army has been running a computer tracking program mostly targeting journalists, several of them from the U.S., but also former ministers, officials from the presidential office, army generals, trade unionists and activists. In less than one year, the military gathered sensitive and private information about more than 130 people that was put together and filed as “profiles” and “special jobs.”

Through computer and software tools, the army has amassed mountains of information about all these people – presumably to use it as meat for military intelligence reports. The data in question consisted of phone numbers, home and work addresses, email addresses, names of friends, family members and colleagues, contact data, and even information about traffic violations.

The data collection has been performed by a slew of cyber intelligence battalions belonging to the military intelligence brigades, as well as the Information Security Counterintelligence Battalion.

For example, one of the victims of the intelligence snooping by the Colombian army was Nick Casey, a correspondent for The New York Times. One of Mr Casey’s investigations, published in May 2019, focused on irregularities in the system of reporting casualties used by the Colombian military. The story sparked a scandal at the time, prompting the Colombian government to send Carlos Holmes Trujillo, then Colombia’s foreign minister, to New York to meet with the newspaper’s editorial board. He was accompanied by Colombia’s ambassador to the United States, Francisco Santos, and the ambassador to the UN, Guillermo Fernández de Soto.

Meanwhile, in Colombia, the military closely monitored the journalist’s moves on the ground as well as his sources, colleagues, family and friends. As a result of these surveillance efforts, other American journalists were also “profiled” only because they happened to be Mr Casey’s colleagues or friends, or because they had contact with him or followed his posts or comments on social media.

One of them was Juan Forero, a journalist who has covered Colombia for publications such as The Washington Post, now working for The Wall Street Journal. According to Semana, the list also included John Otis, the Latin American correspondent for National Public Radio (NPR) in America who has lived in Colombia for more than 20 years, and Lynsey Addario, an American photojournalist whose works have been published in Time and other magazines.

The snooping extended to other people too. José Miguel Vivanco, director for the Americas with the Human Rights Watch (HRW), a New York-based NGO, was also a target. Members of the Lawyers Collective José Alvear Restrepo, an activist organization representing victims of the armed conflict in Colombia, as well as local politicians and even active or retired military men such as Jorge Mario Eastman, a former defense minister, were not spared.

How spying on all these people helped combat terrorism or bust drug dealers is a mystery.

According to Semana’s sources, the entire operation was ordered by the chiefs of intelligence and counterintelligence at the time, Generals Quiroz and Garcia, with the blessing of the army’s top commander. Some of the army’s representatives argued that the data was obtained from public records and social networks.

The Foundation for Press Freedom (FLIP), a Colombia-based NGO, fought back, saying that the operation was “clearly illegal, unconstitutional, inconvenient and undemocratic.” FLIP argued that the snooping has jeopardized the safety of dozens of reporters because it meddled with the lives of the journalist’s sources, putting them at risk.

The military told Semana that they have launched a disciplinary investigation into these practices.