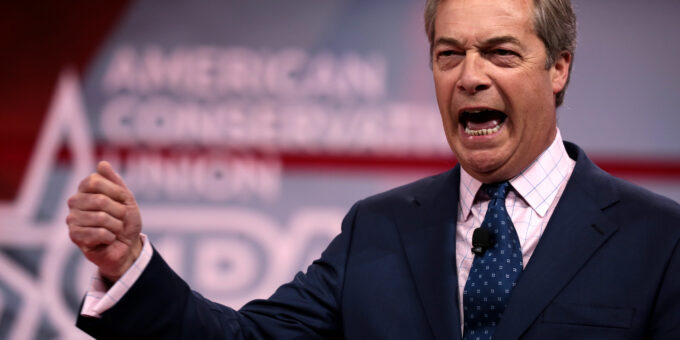 Romania does not currently meet any of the four economic criteria needed for the adoption of the euro, namely those related to price stability, sound public finances, exchange rate stability and long-term interest rate convergence, according to the 2020 convergence report published on Wednesday by the European Commission.

British Airways is selling some of its multi-million-pound art collection in a move to generate funding that it would help the company survive the coronavirus pandemic. The collection includes art by Damien Hirst, Bridget Riley and Peter Doig. One work has an estimated value of more than £1m.

Anglo-Dutch manufacturing conglomerate Unilever chose London as its headquarters over the Dutch city of Rotterdam. The decision follows a revolt by British shareholders after Unilever announced plans in 2018 to “go Dutch.”

A talkshow run by Nigel Farage, the Brexit party leader, was abruptly canceled by the UK radio station LBC. The station is owned by media and entertainment group Global.

German airline Lufthansa is planning to slash 22,000 jobs as it struggles to deal with the slump in air travel triggered by the coronavirus pandemic.

Heiko Maas, Germany’s foreign minister has warned Israel that its plan to annex parts of the West Bank would violate international law. Maas would not say how Germany or Europe would respond.

A Turkish court has sentenced Metin Topuz, a translator and assistant for the Drug Enforcement Agency at the U.S. consulate in Istanbul, to nearly nine years in prison. Mr Topuz’s trial has strained ties between Ankara and Washington for years.

Critics of President Erdogan accused him of creating his own personal police force by expanding the powers of the night watchmen, or neighbourhood guards. They are allowed now stop and search people if and when they see that necessary. They are also allowed to carry weapons and use force.

Nearly four years after a failed coup attempt, the Turkish authorities organized a series of large-scale operations aimed to arrest soldiers who are believed to be supporters of cleric Fethullah Gulen. Authorities say that Gulen was behind the bid to overthrow the government.

Rinat Akhmetchin, the mayor of Norilsk, an Arctic city in Russia,  has been charged with negligence over his response to a spill that dumped thousands of tons of diesel fuel into local waterways.

Authorities in Far East Russia charged Yulia Tsvetkova, 27, an LGBT rights activist with distributing pornography. The activist faces six years in jail for posting drawings of vaginas on social media. The drawings were posted on her page dedicated to body positivity, as she said.

Chechen leader Ramzan Kadyrov wants to donate US$ 131,500 to help men affected by the coronavirus pandemic “buy” brides under Islamic law. A total of 207 grooms in Russia’s North Caucasus republic of Chechnya would each receive US$ 635 to get married in accordance with traditional Islamic practices.

The Polish army says that because of a “misunderstanding,” they will pull out of a position it occupied in the Czech Republic. The Polish army set up a border control post along the twisty Polish-Czech border last month, as part of border closures due to the coronavirus pandemic. But by doing so, they blocked a path running to a historic chapel in the Czech Republic.

A 34-year-long murder investigation was brought to an end in Sweden as authorities announced that they believed a local man, graphic designer Stig Engström, murdered Prime Minister Olof Palme in 1986.

Hungary’s government on Monday launched Prime Minister Viktor Orban’s eighth “national consultation,” described by critics as a tool to create the illusion of popular consent for his controversial policies. As part of the consultation, lists of numerous questions are sent to every household in the country. The newly introduced survey is about the coronavirus response.

Former Bosnian state prosecutor Bozo Mihajlovic was sentenced to five years in prison for failing to prevent his assistant and typist from embezzling a total of €115,000.

The Russian and American administration announced that they would resume talks this month on extending a major nuclear disarmament treaty.

White House announced that it would authorize sanctions against the International Criminal Court (ICC) as a response to the ICC’s efforts to investigate alleged war crimes by U.S. troops in Afghanistan.

The United States has reopened a consulate in Greenland, in the capital Nuuk. The U.S. diplomatic mission in Nuuk was previously in operation from 1940 to 1953.

Donald Trump, the US president, announced withdrawal of 9,700 American troops from Germany, which is a third of its forces stationed in Germany. The decision is evidently going to benefit Russia.

U.S. fighter jets intercepted Russian bombers twice on Wednesday off the coast of Alaska. They came within 37 kilometers of the Alaskan coast.

Hong Kong is planning to establish a new police unit to enforce new security laws. The new unit is expected to enforce controversial new national security laws from day one.

US navy for teh first time in three years patrolled Indo-Pacific as US-China tensions are deepening. Recently, China has been running a campaign to militarise human-made islands in the South China Sea.

A boat that was carrying 53 people who were trying to reach Italy sank last week. The people on the boat were coming mostly from sub-Saharan Africa. The boat left the Tunisian coast from the city of Sfax. At least 35 of them died.

Video conferencing service provider Zoom suspended the account of a group of US-based Chinese activists after they held a meeting on the Zoom that commemorated the Tiananmen Square crackdown.

Twitter plans to prevent its users from sharing articles they have not read. The experiment is aimed at promoting an “informed discussion” on social media.

The e-retail giant Amazon has banned police use of its face-recognition technology for a year. The technology allows identification and location of people from a digital image or a video frame.

A mural by famous street artist Banksy that was declared stolen in Paris last year reappeared now in Italy. The mural shows a girl in mourning and commemorates the victims of the November 2015 Paris terror attack at the Bataclan concert hall.

EU trade chief Phil Hogan announced that he was going to apply for the top job at the World Trade Organization (WTO).