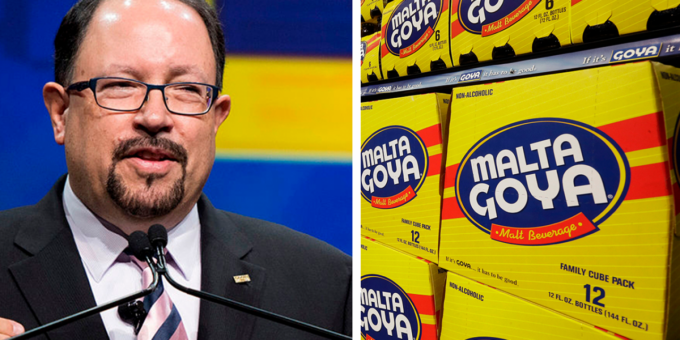 Robert Unanue, the head of Goya Foods, wins idiot of the week for sitting next to Donald Trump in the White House and saying “We’re all truly blessed at the same time to have a leader like President Trump, who is a builder.” He has been rewarded with a commercial endorsement from Trump and a boycott of his company.

Started in 1936 by Unanue’s grandparents, immigrants who moved from Spain to Puerto Rico and then New York City, Goya products are immensely popular among Latinos in the US and several Latin American countries. Given Trump’s derogatory statements about Mexicans, his neglect of hurricane-ravaged Puerto Rico, and his decision to separate Latin American parents and children who have been deemed to have entered the US without permission, Trump is not popular in the Latin community, hence the calls to boycott Goya. Trump supporters who are trying to undercut the boycott by buying Goya products are being urged on by the President himself, including with tweets that look like the commander in chief is making supermarket advertisements. In the short term, Goya may weather the boycott and actually strengthen loyalty from conservative Latinos in the US.

But before Unanue made a show of trying to buddy up to the president, Goya could lay claim to the hearts, pocketbooks and bellies of all kinds of consumers. Unanue’s apparent insensitivity to the concerns of the Latin community, including Hispanic immigrants like his grandparents, means that a decision about what brand of beans to buy has become a political statement, and many consumers are voting against Goya.