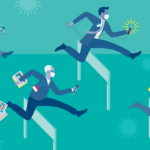 Since the start of the pandemic crisis, in the U.S., “at least 21 local newspapers have merged, at least 1,400 newsroom staffers have been permanently laid off, at least 56 outlets have temporarily suspended print editions, and at least 60 local newsrooms have been closed.”

That is the grim finding of the Poynter Institute’s layoff tracker site, now reported by a study commissioned by the Konrad Adenauer Stiftung, a German charity.

The newly issued report maps dozens of plans and proposals to help save journalism from the deep economic pit where it was thrown during the Covid-19 pandemic. Some call this crisis a “media extinction event.”

The main paradox of the times we live in is that, although the audiences’ thirst for reliable information soared, thousands of journalists have been laid off around the world and numerous media outlets were financially crippled, some even forced to fold, by shrinking revenues, according to the report, which was authored by Anya Schiffrin of Columbia University.

The study enumerates the ongoing initiatives to address the financial problems that devastate journalism during the Covid-19 crisis, assessing the likelihood of success of some media, and profiling various key players around the globe.

Some of the current initiatives to save journalism include Australia’s efforts to get Google and Facebook to pay for news and the efforts in the U.S. to adopt laws and approve investments to support local news. During such desperate times, new ideas are needed; hence, a surprising number of proposals that broke with the past practices were surging.

The report sees the solutions in four categories: more private funding, public subsidies for journalism, new business models, and revenues from a tax on tech platforms.

First, the need for more private funding is becoming painfully clearer, but at the same time, there is a growing recognition of the need for something like a “Marshall Plan for journalism,” according to Schiffrin. A number of well-known media development experts have begun to coordinate donors, which are forming temporary coalitions to help with the flow of funds to the media. Moreover, funders and academics are trying hard to find the solution to support journalism. But that is not enough to keep local news outlets viable and sustainable in the long term.

Second, governments can do their bit. One example to follow is France where the government moved quickly and introduced in July 2020 a tax credit of about €45 (US $50) for households buying a French newspaper subscription. They’ve also added close to €140m to be spent on anything in support for journalism. Another solution is to buy a ‘super subscription’ to news services, which means to buy a large quantity of the media output and make it freely available to selected groups such as public servants, academics, local governments and others. This is how Churchill saved Reuters after WWII.

When it comes to new business models, the report states that the time of advertising as a funding pillar for media is gone. The business model that seems to be most sustainable is the one generating revenues through memberships and subscriptions.

Finally, making tech companies pay for quality journalism is a controversial and much debated solution. It has high chances of becoming a reality in Australia, but not in France and Spain. Australia’s competition authority has drafted a code that, if legislated, would require Google and Facebook to pay for the news they carry. Facebook and Google slammed the proposal as unfair and “totally unworkable.”

The report calls on “donors and governments to spend heavily, coordinate, and push forward with efforts aimed at leveling the playing field with tech companies.”

The post Journalism After Covid: What Will Be Left of It? appeared first on MediaPowerMonitor.

Dominant thanks to their privileged status and special funding arrangements, state media play a disproportionately high role in shaping narratives, especially in times of crisis,...
More

When the world is mad at Russia for invading Ukraine, bombing its buildings and killing its people, companies leave Russia in droves, and sanctions are...
More